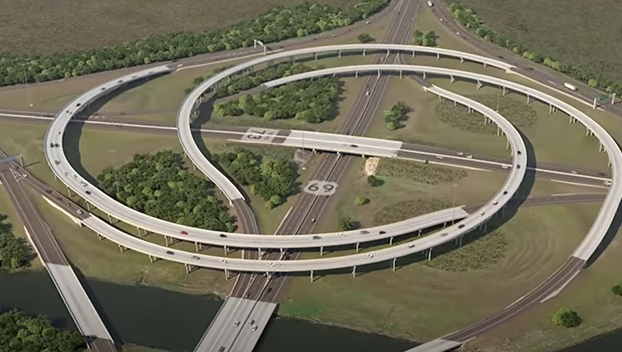 US69/SH73 Turbine projection courtesy of the Texas Department of Transportation.

The Texas Department of Transportation announced the northern two quadrants of the existing cloverleaf exchange will permanently close Tuesday.

The closure comes with the department’s ongoing effort to turn the intersection at Texas 73 and U.S. 69 into a turbine exchange — one of only two in the state.

Detours previously announced for the planned closure have changed.

Beginning June 29, motorists traveling from Texas 73 westbound to U.S. 69 southbound will be directed to the turnaround at Jimmy Johnson Boulevard.

Those traveling from Texas 73 westbound will turnaround at Jimmy Johnson and merge onto U.S. 69 southbound.

Those traveling the northeastern quadrant will still take the original detour — turnaround at Jimmy Johnson Boulevard, merge onto U.S. 69 southbound and then take the exit to Texas 73 westbound.

The closure is weather permitting and subject to change, according to TxDOT.