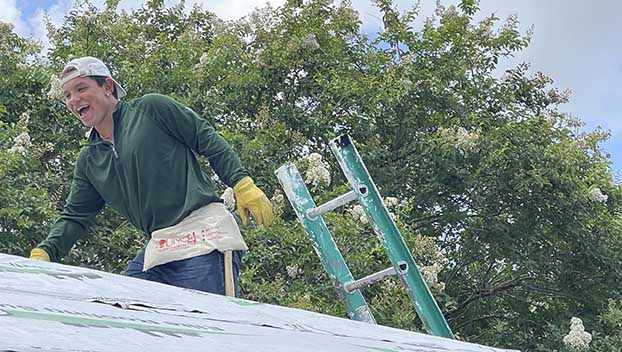 Damian Usseri, 16, laughs as he climbs onto a roof on Barryknoll Lane in Port Arthur. (Monique Batson/The News)

When I was first told a group of students from Texas churches were working on storm-damaged homes in the area, I drove out expecting to find a few teenagers painting and patching holes.

I happen to have teenagers of my own, who at that very moment were at home sleeping with dirty dishes in the sink and at least two cereal boxes beside but not inside the perfectly acceptable trashcan.

There were no sleeping teenagers on Barryknoll Lane in Port Arthur on Wednesday.

The 24 students, along with five adults who had come in from churches in Kingwood and Brownfield, were spread from the roof to the rooms inside the house that was flooded by Harvey in 2017. Several were on top of the house removing the roof, tossing old materials down to another group that would load it into dumpsters.

One of the students hauling used materials was only 12 years old.

Inside were more students wielding power tools and gutting rooms with the intention to replace and paint the sheetrock.

And it was so inspiring to watch. It was tempting to run home, change clothes and return to join them.

This would be the same day I gave myself a mental trophy in achievements for learning to replace the battery in my car remote by watching a YouTube video, and there were children not even old enough to drive replacing an entire roof.

The mission was a service provided by Bounce Student Disaster Recovery, which operates through Texas Baptist Men. Churches from across the state join and travel to various locations to assist those in need.

The particular homeowner on Barryknoll Lane had lost almost all of her furniture in Harvey and had been living in a house with no flooring and rotting walls for five years.

By the end of the day, that will no longer be a burden she has to carry, and all because of children that could have spent their summer watching Netflix but instead took their faith and desire to serve to unfamiliar cities and help strangers.

I spoke with a few about their motivation and lessons learned. And while some gave funny and unexpected but candidly honest answers, the underlying message was the same.

Garza is from Brownfield and was on his first mission with Bounce.

Also on his first trip was 16-year-old Blake Brisendine.

“I’ve never put on a roof before, so I learned how to do that,” he said. “They’ve gone a long time with the damage, so it’s nice to help them out and put the roof on for them.”

When asked what he learned, Danian Usseri, 16, made me laugh.

“I learned that it’s really humid out here. Really,” the teen from west Texas said. “A couple of people I didn’t expect to throw up ended up throwing up on the first day.”

But if nothing else, Usseri’s comments only illustrate the dedication shown by the group of young adults. And he followed it up by saying even he found inspiration in watching those around him work.

And they didn’t just inspire each other, but the adults around them, as well.

Julia Evers, whose mother owns the residence, joined the group. Evers and her brother had been working on the home since Harvey, trying to make the repairs themselves when they could.

“It feels good to be with them and help them do things, and try to teach and guide them,” she said.

To learn more about Bounce, call 214-828-5123 or visit texasbaptists.org and click the “ministries” tab.