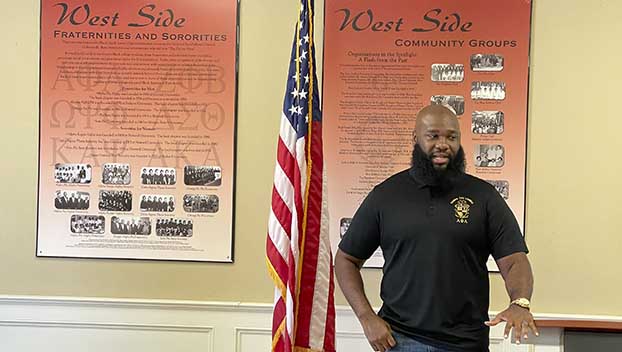 Constable Christopher Bates speaks about Alpha Phi Alpha Fraternity Inc. at the West Side Development Center. The signs on the wall behind him detail the history of fraternities, sororities and community groups in Port Arthur. (Monique Batson/The News)

When Hurricane Harvey hit in 2017, Constable Christopher Bates was holding a great deal of responsibility. But as a member of Alpha Phi Alpha Fraternity Inc., he had help from all over through the group’s Brother’s Keeper initiative.

“We’re thankful for this program and we really did a lot with this program during the hurricanes,” he said. “They actually came out during Hurricane Harvey and assisted myself, because I was the point of contact for getting some supplies here for the community. And then we assisted Lake Charles during the hurricane and helped them out, as well. We make sure we’re taking care of each other.”

Bates spoke Thursday to the Rotary Club of Port Arthur about the fraternity he joined in 2013. 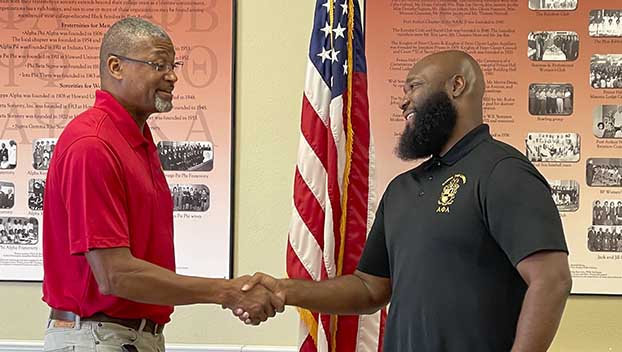 “Locally we have what we call our Golden Triangle chapter, and so we encompass all three areas of Orange, Port Arthur and Beaumont,” he said of the fraternity founded in New York in 1906. “Our history is very deep and rich.”

Brother’s Keeper is just one of several national programs and ensures fraternity members take care of each other, and often times their widows.

“We go out and we make sure that we’re taking care of our brothers in the fraternity. Sometimes we’ll just show up to a widow’s house with a yellow rose,” Bates said. “Our fraternity flower is a yellow rose, and you’d be surprised what a yellow rose will do for a widow just wanting to have someone know they’re being thought about.”

“His wife…she told me when I met with her that her dad was the first black principal of Lincoln High School in Port Arthur, Texas,” he said.

Another national initiative — Go-to-High-School, Go-to-College — is still widely pushed, but has changed a bit in time.

“As things have transpired over the years, we want to make sure that young people are going to high school and being productive — whether it’s going into the military, whether it’s learning a trade. We want them not just to be idle, sitting at the house playing video games,” he said.

Rotarian Regina Drake commented on Bates’ work with the youth when introducing the constable as the day’s guest speaker.

“He is everybody’s son,” she said. “I appreciate Chris. Outside of the purview of his job, he has exemplified as an individual how we can contribute to our community to make it better. And I think that in itself, he models the behavior we want to see in our young people.”

For more on Alpha Kappa Alpha and the various other community service projects they are involved in, visit https://apa1906.net.