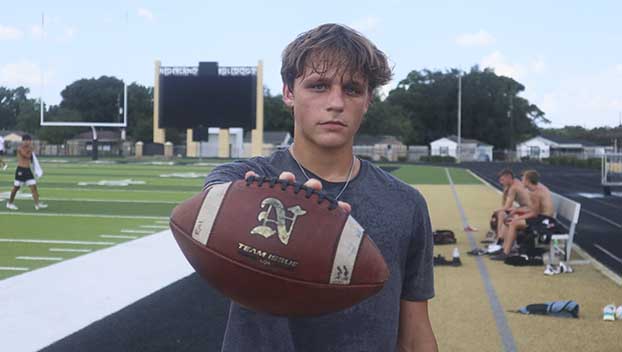 Nederland receiver Reeve Barrow is ready for his senior season with the Bulldogs. (Chris Moore/The News)

It is the same last name as two of the coaches on the staff. His dad is Head Coach Monte Barrow, and his brother is receivers coach Seth Barrow.

Reeve Barrow feels like he knows the playbook as well as anyone since he grew up learning it.

“After Seth graduated, we reflected on all of that, and it is great memories,” Monte Barrow said. “You don’t know if you will have that again. Ten years later and here we are. It is kind of neat. When you are at the house or with family and that comes up. (Seth’s) stories come up and then the present comes up. It can be nothing but great. I am sure every dad out there would love that opportunity.”

Seth Barrow is part of Nederland Bulldogs lore. He was part of one of the biggest plays in the program’s history. In 2012, the Bulldogs defeated the No. 1 team in the state in the playoffs when Carson Raines hit Seth Barrow for the walk-off touchdown to defeat Pearland Dawson.

“My brother went through the same thing,” Reeve Barrow said. “There is always more pressure there. He is always going to expect me to get to my highest capability. He is going to hold me accountable just like everyone else.”

Reeve said being able to pick coaches’ brains whenever he feels like it counterbalances the pressure.

“It is a huge benefit,” he said. “I have probably known this playbook since I was in seventh grade. I have been around it my whole life. To have my brother make that catch, it makes me want to recreate it and have something like that.”

Monte Barrow thinks Reeve has an upper hand by being around the game and team from such a young age.

“He is very knowledgeable about what we do,” Monte Barrow said. “He probably got a lot of it from osmosis. He has been on the sideline since he was in the fourth or fifth grade. He helps out a lot at receiver by helping the guys next to him. He has a year under his belt of Friday nights, which is a big thing. Him and Preston (Deserrano) will have that advantage and hopefully that will rub off on some of these other guys.”

While he will try to make a name for himself on the field, Reeve Barrow said his biggest goal is just to be a good, dependable teammate.

“I want to be the best team player I can be and do whatever I can to help us win,” he said. “I don’t want to regret anything just knowing that you only have one more year to do this with the guys you have grown up your whole life. There is nothing else like it.”