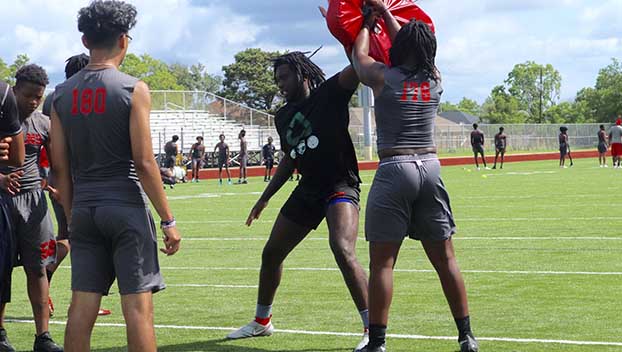 As the Memorial football team pushed through the heat of the summer workouts, the Titans had a few familiar faces giving instructions to the returning team.

Three recently graduated players were working out with the Titans and giving advice to their former teammates.

It was a hot morning and no one was making them do it. In fact, no one would have blamed them if they opted to not be there at all. But these acts are what builds programs. Any coach will tell you a lot of football games are won and lost in the summer. The way players prepare and the way coaching staffs motivate in the heat of a Texas summer can be the difference between a district championship and a .500 record.

It is no secret that young athletes can tune out coaching. They could be more inclined to hear something that is coming from a player that has received a college scholarship and was just on the field with them the previous season. Student athletes can see the direct relationship with a player and success.

That is why it matters that Christian Thomas was out their mentoring the defensive linemen. Thomas had been the team’s most dominant pass rusher and won the district defensive MVP in his junior year, earning him a scholarship offer from Northwestern State University.

While waiting to move up to his new home in Louisiana, Thomas spent some time at the Memorial summer program. It is a mutually beneficial experience. The players and coaches get more help and the graduated seniors get a facility to stay in shape while they wait for college move-in days. And they aren’t just talking to younger players. They are getting in the drills and showing them how it should be done.

During a break, coaches were telling players to run. Thomas turned next to a player who was walking next to him and told him he needed to run.

As the player began to run, Thomas laughed and said, “I’ve already did my running. I get to walk now.” Years of running put Thomas in the position he is in now. And soon he will be running again for NSU.

Thomas wasn’t the only former Titans star at Memorial. Former safety Devuan Davenport and running back Adrian Hayward were also present. I am sorry if I missed any other graduates who were out there.

These acts are important. This is how culture and team identity are built. Incoming freshmen get to see what success looks like and what it takes to get to the top. That rubs off, too. It is also common to see incoming seniors, like cornerback Jelani Chevalier talking to younger defensive backs when he is on the sideline.

That is how you go from being a good program to being a part of back-to-back district titles.