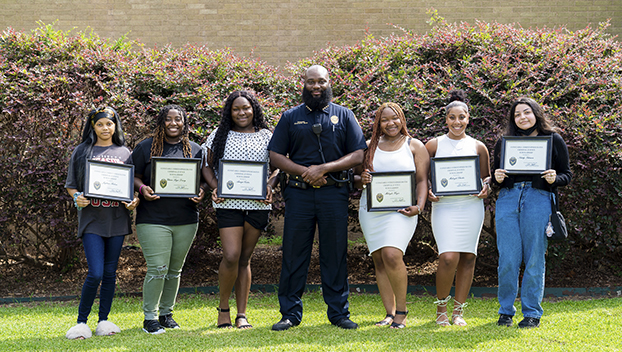 In 2015 Constable Christopher Bates wanted to make a difference using the best possible tool — education. And that year, he gave a $500 scholarship to one Port Arthur-area student seeking a career in law enforcement.

“There’s a lot of things, even now today, going on in our nation between law enforcement and communities, and I wanted to bridge that gap,” Bates said. “I thought the best way…was to offer some financial assistance that would help them start their journey into education and college in the criminal justice field so they can come out of their collegiate journey with a better understanding overall.”

Over time, the annual scholarship has grown, this year resulting in six students each receiving $1,000.

For Nataly Salomon, learning she was a recipient was a complete surprise.

“I wasn’t really sure I had received it because our school had a list of scholarships everyone had received, and on the graduation commencement packet I saw my name was on there and I had gotten (the scholarship), but I was unsure,” said Salomon, who recently graduated from Memorial High School. “When Constable Bates got in contact with me, I was so excited.”

Salomon plans to start her career by studying criminal justice at Lamar University. Since middle school, she’s aspired to becoming an attorney.

“I don’t think I’ve even met with an actual attorney,” she said. “It’s something that’s always interested me.

Mikayla Hayes has also always been interested in becoming an attorney.

“My main interest is being the representative for someone that doesn’t have a voice and doesn’t understand laws,” said the Woodrow Wilson Early College High School graduate. “I’m a first-generation college student and finished with an Associate’s Degree. Most of my family worked in the refinery or medical fields. I’ve been around that and knew it wasn’t for me.”

As a child, on career day, Hayes dressed as a lawyer. So learning she had assistance through Bates’ scholarship to follow that path was, she said, exciting.

“There aren’t many criminal justice scholarships in the area,” Hayes said. “They’re mainly in the medical field or engineering. I was excited to find a scholarship in the field I’m interested in.”

Hayes will be attending Sam Houston State University this fall.

Bates began his career in law enforcement in 2008 with the Port Arthur Police Department. Later, he went to work in a county constable’s office. And in 2011, he decided to run for office. He won the 2012 primary election and took office in January 2013.

“I’ve been hanging out in Precinct 2 ever since because of the people that allow me to serve in this capacity,” he said. “I’m really thankful for the community and the support that they’ve given all throughout the years.”

One such example is the annual breakfast he hosts every April to help fund the scholarships. With plans to expand it, he’s hoping to incorporate a guest speaker and live entertainment with the next event.

“I’m looking to grow it more county-wide,” Bates said. “As we continue to grow and get more students, we’re looking to get more individuals and businesses through the county to support the breakfast.”

In addition to raising money for students, the annual breakfast recognizes a Humanitarian of the Year.