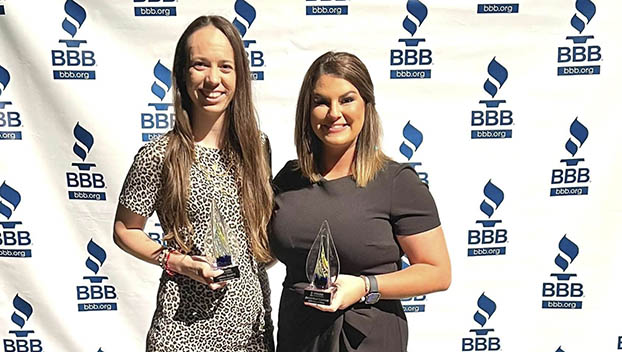 Jana Bartz, left, and Jacey-Kay Carter received the Spark Award at the 2022 Better Business Bureau’s Torch Awards. It was the first time the BBB gave the award to two business owners. (Courtesy photo)

A Nederland café owner who opened her store two years ago recently became one of several local business owners to receive one of the most prestigious awards in Southeast Texas.

Janna Bartz, owner of The Golden Cup, was shocked to learn she was a finalist for the Better Business Bureau’s 2022 Torch Awards.

“I know how big the Torch Awards are…and I am so new in business, that was a big surprise,” she said. “The evening and banquet were really nice.”

On June 9 at the Beaumont Civic Center, Bartz received the Spark Award, created in 2019 to highlight entrepreneurs 35 and younger who have been in business for less than three years.

“We just celebrated one year since we expanded into the whole building, so that was a big deal,” Bartz said of her Boston Avenue store that opened in February 2020.

It was a rough start for the business owner, who opened right before the pandemic began. But over two years she’s been able to expand her space, staff and menu.

“It’s just been a progression of things happening that aren’t planned but going day by day,” she said.

While she didn’t expect to start her business this soon, owning a café was always the goal.

“When I was in college, I spent a lot of time at another café that was in the area at the time, and I just really liked the atmosphere,” she said. “Cafés are a place where people in the community can come together and meet.”

Elton Hollis III, owner of Hol-Tech Resources, received the inaugural Micro-Small Business Award, and called it a “highlight” in his career, according to the BBB. 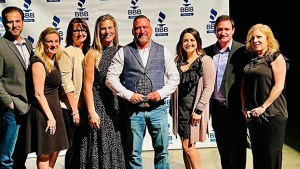 The award is geared to companies that operate with no more than two employees.

Hollis is also co-founder of the Golden Triangle Industrial Group.

The BBB said the Torch Award, now in its 24th year, is given to those who demonstrate a “high level of personal character; ensure their business practices meet the highest standards of ethics; and consequently, generate trust with customers and have a commitment to their community.”