See what Juneteenth activities are planned this weekend in Port Arthur 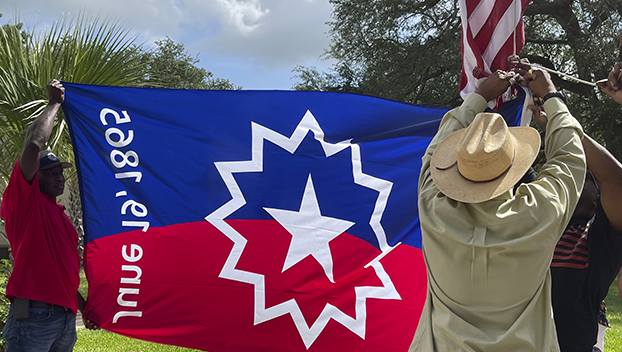 The City of Port Arthur will be celebrating Juneteenth throughout the weekend with a host of community events to fit every age.

Saturday, beginning at 9 a.m., the 4th annual Juneteenth Softball Event and Festival takes place at the auxiliary field next to Memorial High School. The tournament will include a DJ, bounce houses, games and vendors.

The playoffs take place the following day during the Park Entertainment portion of the celebration, said Gail Pellum with the African American Cultural Society.

Sunday, a bike ride is scheduled to begin on Gilham Circle at 3:30 p.m.

Afterward, a parade will line up at 5 p.m. at the corner of Procter Street and Stillwell Boulevard. The parade, which begins at 6 p.m., travels up Stillwell and ends at Barbara Jacket Park.

There, along with the softball playoffs, community members can enjoy live music and family entertainment.

Emanuel Preston with the Willie Carter Outreach Center said they will also be handing out vouchers for children to receive a $25 gift card when they get their first or second COVID vaccine.

Pellum said Port Arthur has long enjoyed days worth of events in celebration of the day.

“Juneteenth is definitely worth celebrating,” she said. “It’s the end of slavery but also the beginning of a whole lot of other troubles.”

Pellum referenced the beginning of the Ku Klux Klan and the slaying of more than 20,000 freed slaves in Natchez, Mississippi, in 1865.

“So many cities like that have so many horrible stories,” she said. “It was a lot of horrors even though it was a day of jubilation and being able to be free, even though you had no education, no land and nowhere to go.”

For the last 10 years, the Cultural Society has been creating a souvenir book that documents Port Arthur Juneteenth celebrations. Previous ones will be available, and people are welcome to submit their photos, stories, poems and other items they’d like placed in the next book.

Pellum said this year is also significant because Juneteenth is on Father’s Day, and the first Father’s Day celebrated in the U.S. was on July 19.

“I would like to pay tribute to Dr. Ronald Myers,” she added of the civil rights activist who repeatedly traveled to Washington D.C. in an effort to have the day recognized as a federal holiday. Myers never saw it happen in 2021, as he died three years prior.

“I just want to lift his name up,” Pellum said. “It’s Father’s Day and I think of him as the father of Juneteenth.”

Attorney for choir teacher denies allegations made by former…