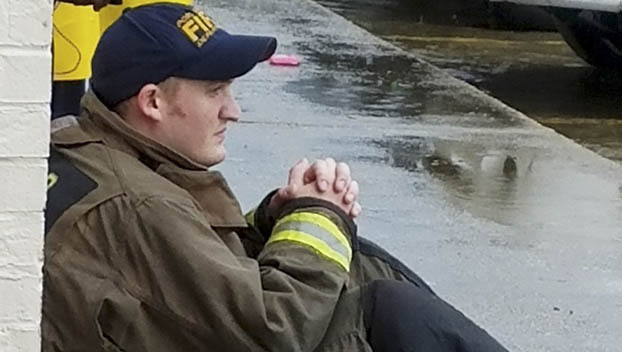 It’s been nearly five years since I shared a photo on the Internet of a Port Arthur firefighter sitting beside Max Bowl hours after people trying to escape Harvey’s floodwaters broke into the facility seeking shelter.

Once the owners received notice of a security breach, the building was opened as a safe haven, with people serving food as others slept on bowling lanes in wet clothes.
I woke up that day at 4 a.m. to start my designated storm shift, only to find myself in waist-deep water on a road I still drive daily. Walking into the bowling alley was beyond sobering.

My priorities shifted, and I was no longer there to report the story; I began offering my cell phone to anyone who needed to make a call. As a lifelong Southeast Texan, I was among my neighbors who had lost everything they had.

It wasn’t long before I had to leave the main room and stand on the side of the building to shed tears.
That’s when I saw Alex. Immediately, the look on his face told me we were mentally in a similar place. While I would never compare myself to the first responders tasked with saving lives during disasters, journalists work closely with them to ensure the public is aware of essential details, such as where to find water or shelter.

We don’t evacuate; we send our children off with relatives and stay behind. We work through the night, we eat if we can and we sleep when it’s done.
But the day I took that photo, Alex was on his third day with no rest. And he had just spoke to his wife and kids for the first time in days.

I didn’t know that then. I just posted a photo of the scene. But a few months ago during the Port Arthur Fire Department’s pinning ceremony, I watched the now-captain receive his pin with his wife and children.

And this week, I had the pleasure of sitting down with him and talking about that day, those after, and the takeaways.

It’s a story I’m excited to share with you all, among the others that will be told soon. Every year, Port Arthur Newsmedia publishes a “Hometown Heroes” section in the The Port Arthur News. This year, as the fifth anniversary approaches, we opted to make it about Harvey heroes instead. And without a second thought, I knew I had to speak to the firefighter whose photo put us both in a national news article.

Five years later, so many are left suffering from Harvey. Homes and businesses still carry damage. School districts are left waiting for federal funds. And, as I discussed with Alex, almost everyone in Southeast Texas starts feeling fear the moment heavy rain begins to drop.

But from the floodwaters rose heroes — not just first responders, but neighbors helping neighbors with rescues, supplies, and going wherever needed.

On June 25, the weekend edition of The Port Arthur News will highlight some of those people and how they came together to help Southeast Texas through a record-breaking natural disaster.