Memorial placed at house where child’s skeletal remains were found 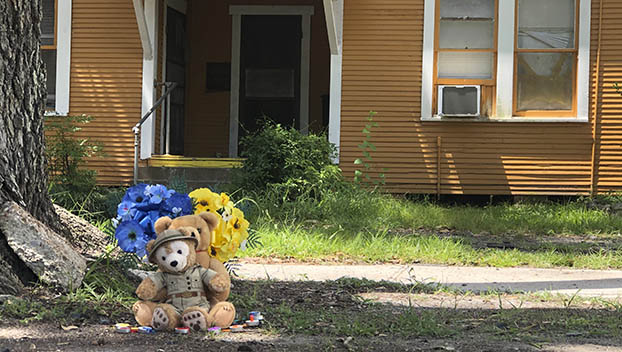 A memorial has been placed outside a residence on Richmond Avenue in honor of King Dewey. (Monique Batson/The News)

Two teddy bears sit outside a residence on Richmond Avenue, where last month investigators found the remains of a “severely malnourished” 3-year-old child.

King Dewey, whose body was found May 31, had at one point been placed in a closet that was padlocked from the outside, according to a probable cause affidavit.

The child was residing with his sister, 21-year-old Kirsten Louis, and 24-year-old Jaylin Jevon Lewis. Dewey’s mother, 43-year-old Tina Louis, had not seen the child since December 2021, the report said.

The mother and sister remain in the Jefferson County Correctional Facility on two $750,000 bonds each after being charged with two counts of injury to a child. Investigators are still searching for Lewis.

Anyone with information on his whereabouts is asked to call Crime Stoppers at 409-833-TIPS.