Officials: Fuel, food prices could keep people from evacuating in the event of a storm 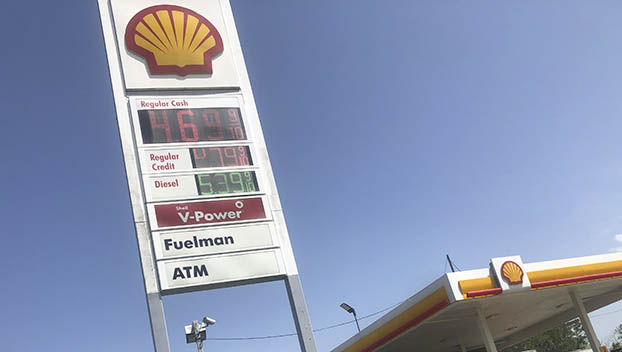 A convenience store in Port Arthur Wednesday advertised regular unleaded starting at $4.69 a gallon and diesel for $5.39 a gallon. (Monique Batson/The News)

When it comes to evacuating for a hurricane, Carlos Johnson said the price of fuel could factor into the matter.

“It’ll scare me to death,” he said while filling up Tuesday at a Port Arthur convenience store. “If I’ve got to evacuate, I don’t know where I’m going.”

The rising costs of fuel, food and the availability of lodging is all something city leaders are evaluating at the start of an Atlantic hurricane season predicted to be above average by the National Oceanic Atmospheric Administration.

“At this juncture, I have spoken about it with others,” said Mayor Bartie. “(We are) looking at rises in the price of gasoline, looking at the necessity of evacuating because of the perils. We can only ask for citizens to be frugal now with their personal finances.”

Bartie asked residents to attempt to save money as they can in the event it’s necessary at some point this season.

In addition, the U.S. Bureau of Labor Statistics in March said the cost of food had gone up 10 percent in 12 months.

But when it comes to evacuation, lodging also becomes a factor.

Hotels in places such as Dallas, San Antonio and Austin are often contracted with the state to house evacuees brought by city bus, Bartie said.

On June 7, he and other department heads met to discuss emergency preparedness.

“We will probably end up with more individuals driving out, parking cars and leaving on what the state will be providing,” he said of transportation provided locally for those in need of assistance. “That’s the best decision for families if they don’t have a way to leave. If you get on the buses the state provides, they’re going to get you to a shelter.”

For Fire Chief Greg Benson, the goal is to ensure city leaders have multiple options.

“There should never be just one plan,” he said. “You need a Plan A, Plan B and Plan C. If you just have one plan and those resources aren’t available, what do you do?”

The fire department is taking into consideration the cost of fuel, food and lodging could cause fewer evacuations, potentially adding to more high-water rescues.

“We have small boats at all of our stations,” he said. “We’ll need to make sure if we have to deploy those boats, how do we do that to get people out of their home and to a safe location?”

In 2017, Harvey dropped more than 60 inches of rain in Southeast Texas. Up to 85 percent of Port Arthur structures were damaged, according to the Associated Press. And only about 20 percent of homeowners had flood insurance.

“Part of this is to communicate to the public that, when information is put out as far as taking action, they need to have trust and feel the information is credible so they will take action,” Benson said.

He and Port Arthur Police Deputy Chief Jeremy Houston, who serves as the city’s emergency management coordinator, have been discussing things such as ordering enough Meals Ready-to-Eat (MREs) for first responders and dividing that cost between the fire and police departments.

And mass rescues, he said, will be the focus of many discussions.

Bartie said the last time the city provided storm evacuation, it consisted of about 1,500 people. Now, they’re considering as many as 5,000 or more.

NOAA’s prediction makes this the seventh consecutive storm season to be considered above average. Up to 21 named storms have been forecasted, with three to six major hurricanes.

“If I make that call and it happens, if they decide to ride it out…it’s going to be between you and God,” he said. “You can make your own choices, I just hope God is with them when they make them.”

For Carlos Johnson, it all comes down to the size of the storm.

“It’s all depending on what The Weather Channel says,” he said while continuing to pump fuel into his vehicle. “I may stay, I may not stay. It depends on what category (storm) it is.”