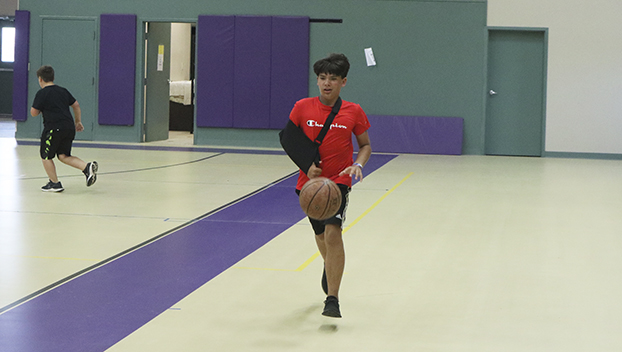 Like many of the local camps, children start out the morning participating in several sports and learning fundamentals. In the afternoon, however, students switch to the classroom for an assortment of classes.

“We have everything from cooking, Spanish, math activities,” Athletic Director Cody Almond said. “We have a lot of stuff.”

The two-week camp has been around for the past few years and is free to kids in the school district.

“We touch about every sport,” Almond said. “We have football and softball and volleyball going on right now. We have baseball and basketball and some other stuff going on next week.”

Almond said the program is a perfect fit for the community.

Among this week’s participants was 9-year-old Jake Deslatte, who said he has had a lot of fun at the camp.

“I have liked running routes,” Deslatte said. “I’m looking forward to doing anything that will be fun.”

He said he is going into fourth grade and is enjoying his summer.

Reid Saunders, 12, was participating in the sports activities despite having his right arm in a sling.

“It has been pretty good. I can’t really catch,” he said laughing. “Running the routes is fun, though.”

While he had enjoyed the physical activities, Saunders was especially looking forward to the afternoon.

Saunders said he has attended the camp since it started a few years back.

“It has helped us get out of the house,” he said. “Me and my sisters just kind of stay inside and do whatever, so it is fun to get out and do these things.”

Saunders said he is going into seventh grade at Sabine Pass. He is looking forward to participating in school sports but said he does not want to rush his summer.

“I’m excited for sports so I can fill out my schedule,” he said. “I ended a lot of my hobbies so now I am not doing much. I am looking forward to football and track.”