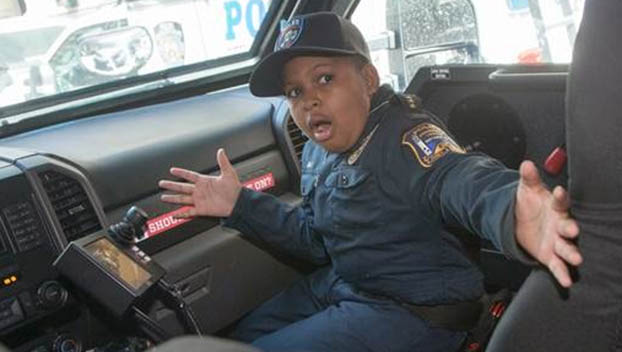 BEAUMONT — Jefferson County’s next sheriff’s deputy might be a little young, but his enthusiasm more than makes up for it.

His spirit is strong despite many challenges.

Davarjaye Daniel, 10, of Houston has terminal brain cancer. He has endured 11 brain surgeries, and one thing has never changed: his love for law enforcement.

Devarjaye idolizes law enforcement officers, so his dad, Theotis Daniel, has been taking him around the U.S. so Davarjaye can meet as many police officers as possible and be sworn into the agencies.

He has been sworn into several hundred law enforcement agencies across the country.

On Wednesday at 2 p.m. in the Jury Impaneling room of the Jefferson County Courthouse in Beaumont, Devarjaye will be sworn in as an honorary Jefferson County Deputy, as well as by other local, state and federal Agencies from Southeast Texas.

The Daniel family has many family ties to Southeast Texas and looks forward to connecting with them as he becomes an honorary SETX Law Enforcement Officer.