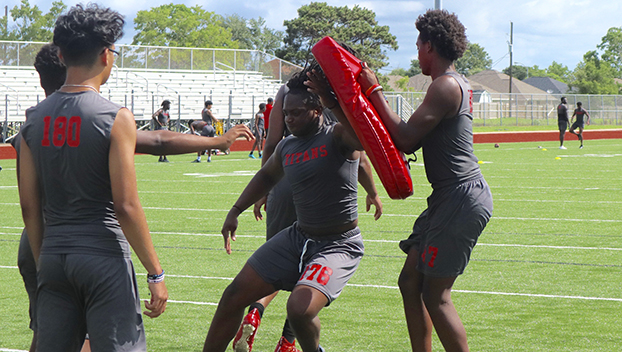 For the past few seasons, the Memorial Titans football team has produced some of the top edge-rushing talent in the area.

Jomard Valsin, Jordon Thomas and Christian Thomas all racked up defensive player of the year awards for the district over the past few seasons.

Valsin went on to play for Northwestern State, while Jordon Thomas is on the Texas Longhorns roster. Christian Thomas graduated from Memorial this year and will follow Valsin to NSU.

While Christian Thomas received a lot of attention last year, he did not lead the team in sacks. That title went to, then junior, Caden Pitre, who returns for the Titans this fall.

“I got first team all-district last year,” he said. “I want to get defensive player of the year this year. We have some big things coming. I feel like something big is coming for me.”

Pitre said he wants to record 15 sacks this fall.

Christian Thomas was helping out during the Titans’ summer workouts, giving tips to defensive linemen. He is proud of what Pitre accomplished and looks forward to seeing how he progresses in his senior season.

“He has come a long ways,” Thomas said. “I remember when he didn’t have any pass rush. It is all coming together for him, though. I can’t wait to see him ball next year.”

Morgan said Pitre’s strength is what allows him to be effective getting to the quarterback.

Pitre said the 2022 defense lacks some size that it packed in the past. He added the team is relying more on speed to get things done this fall. Pitre was listed as 6 feet tall and weighing 215 lbs. for last season.

Morgan said Pitre’s lack of physical presence can make the defensive end a bit overlooked, but added he makes it known when he is one the field with his play.

The coach said Pitre is one of the team’s top performers in the weight room. Last month, Pitre posted a video of himself becoming one of a few members of the Titans to squat 500 lbs. That should come as little surprise to those who know the incoming senior. When asked what he likes to do when he is not playing or practicing, he smiled and said he lifts weights for fun.