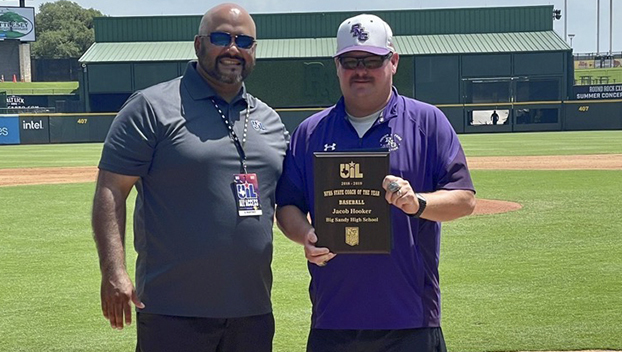 PORT NECHES — For Port Neches-Groves assistant baseball coach Jacob Hooker, individual awards are more about the entire team than anything he was able to accomplish.

Some things are better late than never as the University Interscholastic League presented Hooker with his State Coach of the Year award for 2019, when he was with Big Sandy High School.

Hooker coached the squad in 2019 when the team won back-to-back 2A state titles, capping off three-straight finals appearances.

The coach was supposed to receive the award at the championship games in 2020, but the presentations were delayed due to the pandemic.

“You win coaching awards because you have good kids and good assistants,” Hooker said. “I had a really good assistant that is a head coach now. If you don’t have those type of players that buy in and are good players, you don’t win those awards.”

Hooker said the award allows him to look back at a snapshot in time.

“Most of those kids played in all three state championship games,” he said. “When I look back at it, I didn’t take it all in at the state tournament. You play at night and then turn around and play in the championship game the next day at noon. You are off the field and on the bus.”

In 2018, Hooker said he missed out on a particular moment that he would not miss again.

“The first year, the kids dog piled and I was kind of late to it,” he said. “I didn’t really know how to react. I told myself if we won again, I was going to get in the dog pile with the kids and I did.”

“You hope you have those types of teams again in your career,” he said. “If not, it is a blessing to have them at all. People don’t realize how long of a grind it is in the playoffs. You are playing five straight weeks. Everyone is beat. You are trying to win coin flips. You are working around graduation and senior trips.”

Hooker said he even had some seniors who graduated and postponed the start date for their jobs in order to keep playing in the playoffs.

While he appreciates every moment at Big Sandy, Hooker said he hopes to be able to share similar moments with the PNG faithful.