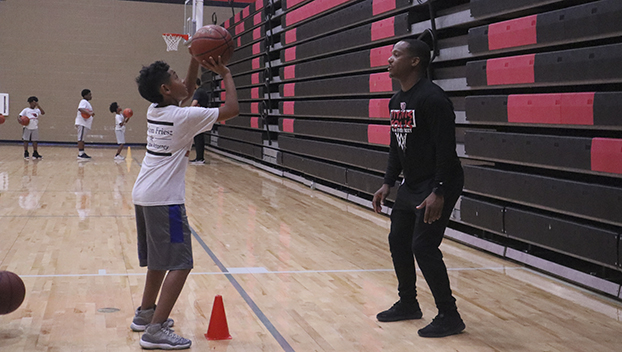 Kids were able to exercise while keeping cool indoors at Memorial’s basketball camp this week. The two-day camp ran Thursday and Friday for kids entering fourth grade up to incoming ninth graders.

Memorial’s coaching staff ran the camp, which is the first time the school hosted one since 2018.

“I am just excited to get the kids out,” Memorial Head Coach Alden Lewis said. “I think we have some good future players out here. It is good to get them out in the summer and doing something. Hopefully it is something we can build on for the future.” 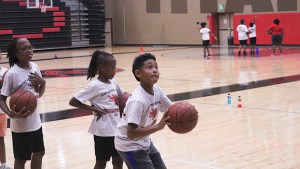 Lewis and the coaching staff spend the afternoon working on basic fundamentals like dribbling, passing and shooting.

“A lot of kids are learning things they can take with them next year or where they will be playing at,” Lewis said. “With this being my first one to host, I am hoping we can get them back next year and see some familiar faces.”

Lewis said he enjoys seeing kids pick up on drills.

“Some of them get it on the first try,” he said. “There are various skill levels here. I know it will get better. I am very happy that some of them knew some of the things we were doing in the first place. We have some good elementary and middle school kids playing basketball and I am excited about that.”

Memorial Athletic Director Brian Morgan looked on as his son participated in the camp.

“It is fun to watch him,” Morgan said of his son. “We just play out in the yard and in the driveway. He plays at The Y. For any of these kids, mine included, it is important to be involved in things. When you look at all ages, especially middle school and high school, the kids not in extracurricular activities are the ones getting in trouble. There is a rule at my house that you are going to do something, whether it is a sport, fine arts or something.” 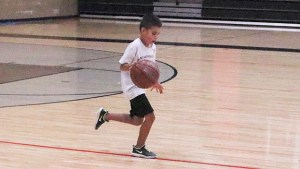 Morgan said he was happy to see kids staying active.

“I think it is good for the kids and the community,” he said. “It gets the kids out of the house and that probably makes the parents happy more than anything. The kids come and most are already playing some kind of organized basketball, whether it is the elementary league or The Y. They can learn some fundamentals and some of these kids will probably high school players at some point.”