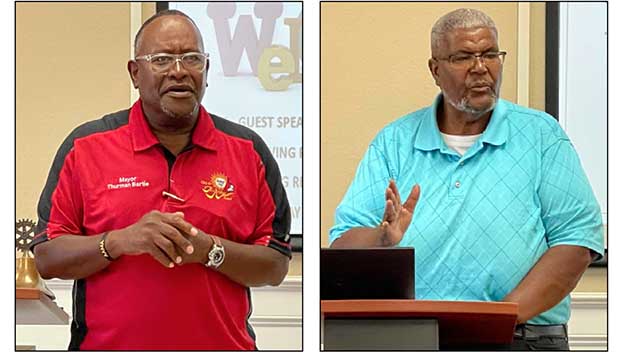 In two separate meetings where each served as a guest speaker, Mayor Thurman Bartie and Floyd Batiste gave similar messages when it came to their visions for the City of Port Arthur — unity.

The two will face each other in a mayoral runoff election Saturday following a May 7 election where neither obtained more than 50 percent of the vote.

On June 2, Batiste spoke to a Port Arthur civic club about his previous employment with the Workforce Development Center, his 17 years as CEO of the Port Arthur Economic Development Corporation and his current role as CEO of ECO Consulting.

On Thursday, Mayor Thurman Bartie spoke to the same organization where he discussed his ongoing plan to address homelessness within the city and preparations for the current hurricane season that began June 1.

During the question-and-answer portion of the meetings, both were asked about their visions for the city.

Batiste said the city currently operates with a vision and a plan, and if elected, he intends to move it forward.

“I think the most important thing in this city is bringing all the people together as one Port Arthur,” he said. “I think all of us working together as one is going to make a better Port Arthur. We may not all agree, but we can think together and come up with common solutions that will solve these problems.”

Bartie referenced his previous term in office, which began in 2019 after he beat former mayor Derrick Freeman in a runoff election.

“I know now it takes the first term for you to learn what is going on,” Bartie said. “If I’m given the opportunity to do it, I’m going to, say, continue the progress. That means I have started some momentum in the learning curve.”

Bartie said he has a degree in Political Science, but learning about it and acting in it are not the same.

“When we talk about the city…it’s a team effort,” he said. “What you cannot have is a mayor that thinks right here and a council that thinks over here, over here and back here or we won’t ever come together. So what I have to do is, even with that…compromise.”

Early voting for Saturday’s election began May 31 and ended Tuesday. Both candidates were at polling places this week to speak with constituents prior to Election Day.

Early voting numbers ended at 2,146, with the highest number recorded Tuesday at 347. Only one day saw less than 200 voters, according to information from the Jefferson County Clerk’s Office.

The number of votes cast in the May 7 mayoral race from both early voting and Election Day totaled 3,021.

There are 28,378 registered voters in Port Arthur, according to information from the county.