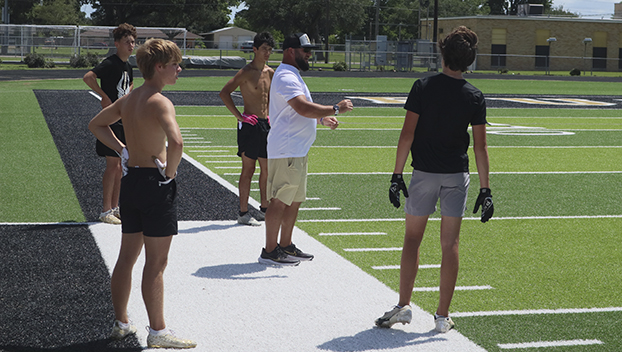 NEDERLAND — After a week off, the Nederland football team began its summer program at Bulldog Stadium this week.

The sun shined as the players took the field in the middle of the day. Temperatures touched into the mid-90s this week.

While there are plenty of opportunities for water breaks, the need for players to adapt to playing in the Texas heat was present given the temperatures would not dissipate by the time the season starts in late August.

During this part of the summer, the University Interscholastic League allows programs to have an hour of skill-based activity a day.

For the Bulldogs, the “skill” players take the field from 11 a.m. to noon, while the offensive and defensive linemen are in the weight room at the high school. The two sides switch after the hour.

Being out of school allows athletes to not worry about class, but on the flip side, the lack of a concrete schedule can prove difficult for maintaining focus, Head Coach Monte Barrow said.

“You’re not on the regiment you are used to being on where you go to first period and then the next period and so on,” he said. “You have to make sure you are mentally ready to go when you come out here. You can’t just show up and go through the motions. There is no way you can get better doing that.”

With no padded contact allowed, Barrow said the players focus on situational drills. The players practices scenarios they are likely see in games.

The team starts to prepare for those moments in the heat of the summer so when players are tired and unable to think in the fourth quarter of a close game, the situational drills turn into muscle memory.

“We target certain situations like third-and-short or red zone,” Barrow said. “We look at stuff from inside the 20 and inside the 5. We did a lot of that last summer. We have that in our minds and we can recall it when it happens in the fall. It is all about communication and knowing where everyone is and what they are supposed to do.”

Landen Caywood will play both sides of the ball next season for the Bulldogs. He said his and the team’s conditioning would be tested in how well they perform on the field in the fall.

The summer program also allows new leaders to step up. Last season Jaice Beck and Kyndon Fuselier led the Bulldogs, but the team will look elsewhere after the two graduated.

“You have guys that might be the leaders in this setting and the locker room setting,” Barrow said. “You may have guys that are leaders on the field in a game. Sometimes, depending on your position, you might not be able to lead verbally. If you are a big guy, you are looking for your next breath. Other guys have to step up in that role.”