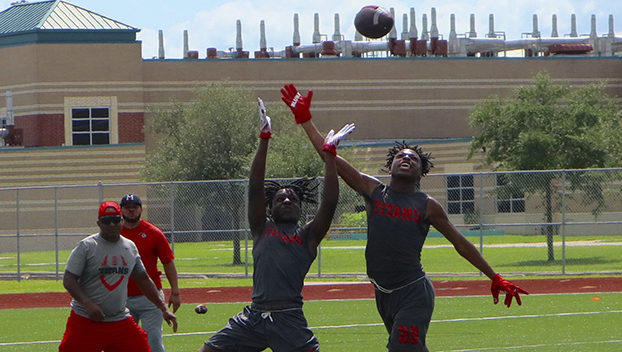 While most high school football programs began their summer programs this week, Memorial entered its second week of workouts. With the departure of a large senior class, position battles for key roles on the Titans team begin.

Fans will have a close eye on the quarterback position, which was occupied by two-time district MVP and recent graduate Jah’mar Sanders.

Davion Wilson and Cobe Stover are taking snaps during the summer workouts. Wilson is an in-coming senior who transferred from Dekaney High School in Houston. Stover backed up Sanders last season.

“Both of them are really talented,” Memorial Head Coach Brian Morgan said. “I think both will have a chance to play for us. We can win a lot of games with both of them. We’ll see who takes the job and wins it throughout the summer and fall camp. It is nothing that is going to be decided today by any means.”

Morgan said the quarterbacks are similar but offer different strengths.

Incoming senior defensive end Caden Pitre said the team will have to lean on speed this year.

“We aren’t as big as we were last year,” he said. “Our speed is our biggest strength.”

Morgan said coaches have had all spring to evaluate players. Most of the players have been in the program, leaving very few actual position battles on the team, except for a few roles.

“For us, it is more about going through reps and getting everyone acclimated,” he said. “…We are just trying to put all of the pieces together and learn. The (quarterbacks) are the biggest ones that everyone wants to talk about. I think we are going to have some young running backs that are really talented. It is not guys popping out of nowhere.”

Many of the graduated seniors had three years of experience on varsity, which makes it more difficult to replicate.

“We graduated some really good players that have played a bunch of football,” Morgan said. “There is one linebacker position where there are multiple guys battling for it. Other than that, we know who is in the mix. It is about getting reps and getting better at what we do.”