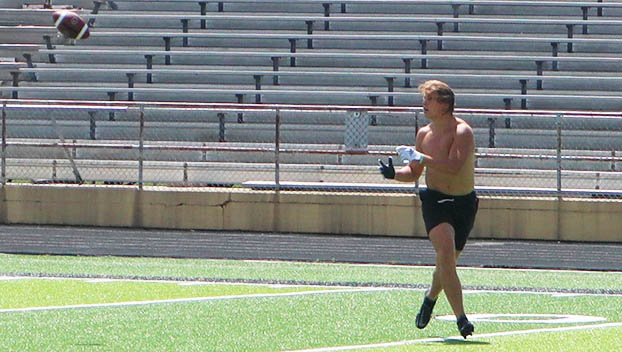 NEDERLAND — Nederland’s Landen Caywood joined his teammates at Bulldog Stadium this week to start the team’s summer program. In the fall, Caywood will resume his play at the defensive end position but will also see more snaps on offense as the team’s tight end.

The incoming senior’s key to playing both sides of the ball starts during summer workouts.

“On the D-line, most of the stuff we do, I have been doing since I was sophomore,” Caywood said. “I have that down. On offense, I need to learn to run plays and the blocking schemes. It is not that much of a challenge right now. It will probably get harder in a game because I will be more tired.”

Caywood was able to watch Kyndon Fuselier play all sides of the ball last year. Fuselier has since graduated, which has left a void for potential playmakers like Caywood to fill.

“Kyndon never came off the field,” Caywood said. “He was always on the field. There were times he was gassed. I just want to be able to help. To do that, I have to be in the best shape I can to be able to help. If everyone isn’t in great shape, we are not going to be as good as we can be. We need everyone to be in the best shape they can. Everyone has to do what they can outside of practice, along with everything else.”

“He has been there and that is a big deal,” Barrow said. “This will be his third year starting. We are getting him on both sides of the ball because he can be a weapon. He can split out and line up at tight end. We can use him to our advantage.”

The Bulldogs graduated three playmakers on the defensive side of the ball in Fuselier, Jaice Beck and Jacob Kotz. Caywood will likely spearhead a new era of Bulldogs football with lesser-known names making plays under the Friday night lights.

“I think we will be able to adjust,” he said. “We lost (Jaice) Beck and Kyndon (Fuselier). Those were our main two players. We lost some O-linemen, but the line has been working really hard. I think they will get it. On defense, we have some young kids that are stepping up. We will be good.”

The defensive end/tight end added muscle to his frame in an attempt to add power moves to his arsenal.

“I feel like I am stronger,” he said. “I think I can do more power moves, but at the same time, I feel like I can do my speed moves off the edge. I want a decent amount of sacks, but I just really want to have a good senior season and end of high school.”