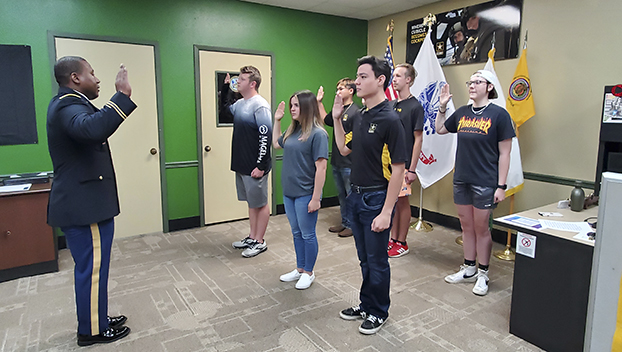 Natasha Cecka has a photo of her son at age 3 sitting on a military helicopter at the airport.

And last week saw him raise his right and take the oath of enlistment for the U.S. Army, where his job will be as a helicopter mechanic.

But Cecka’s son, Austin Ronning, won’t stop there. He aspires to become a pilot and spend his career in the Army.

Ronning, along with five other recent local graduates all surrounded by family, took part in the brief ceremony Thursday at the Port Arthur Recruiting Office.

“I am very excited for him,” Cecka said of her son. “This is something he’s wanted his entire life and to watch him fulfill his dreams is something every mother wants.” 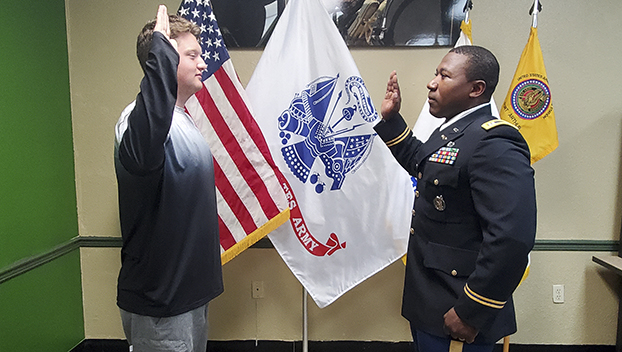 Ronning decided to enlist because he wanted to better himself, and it’s something he’s always dreamed of doing.

Staff Sgt. Anne J. Hellberg spoke with the crowd of family members of the enlistees who gathered to watch the ceremony, saying it is impressive for them to make that kind of commitment to the country.

When I was 18, I tried to do this and ran away because I was scared. Four years later I ran back to make the same decision.”

And even with the support of family and friends, enlisting is a journey only the enlistees can take by themselves. 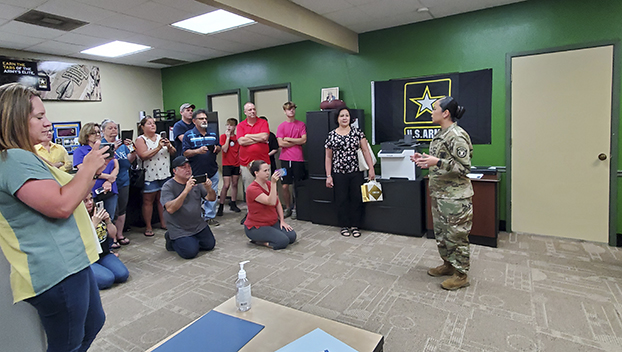 U.S. Army Staff Sgt. Anne J. Hellberg, left, addresses the crowd of family and well wishers who were in attendance for the ceremony. (Mary Meaux/The News)

The actual oath of enlistments was done previously in the Houston area but due to COVID restrictions, family wasn’t allowed hence the reason for the ceremony Thursday.

Friends Kylie Vincent, a recent graduate of Nederland High School, and friend Avery Foley-Heling, a 2021 graduate of Port Neches-Groves High School, are “battle buddies,” Vincent said, meaning they enlisted together and will go to the same boot camp.

Foley-Heling said she enlisted because of the benefits and because she needed stability in her life. Vincent said she wants to reach her full potential mentally and physically.

Kelly Tran, a 2022 graduate of Memorial High School, wanted to be part of something bigger than himself.

His job while in the Army will be combat medic, he said.