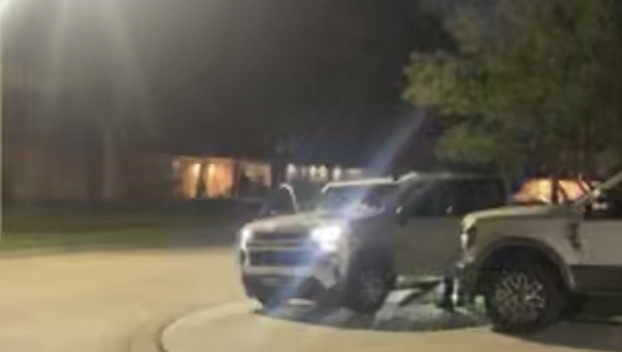 A stolen vehicle involved in a police chase was left in the front of a Port Neches residence. (Photo courtesy Debbie Plaia)

PORT NECHES — A set of alleged thieves being chased by police ended up bailing out of a stolen truck in a Port Neches neighborhood but were caught shortly after.

The chase ended in a cul-de-sac, where the driver placed the vehicle in reverse and backed it into a residential driveway, striking a truck.

Debbie Plaia said her husband was home at the time, saw the headlights and went outside to find the stolen truck in his driveway.

Her reaction when he called to tell her was “wow,” she said.

The truck was one of six reported stolen from Port Neches over the weekend, Police Chief Paul Lemoine said. The investigation is ongoing with one vehicle stolen from 15th Street, one from an apartment complex on Merriman Street, two from Oak Terrace Street and one from Matterhorn Apartments. The location of where the sixth vehicle was stolen was not available Monday afternoon.

The truck that ended up on Cheryl Court was the one stolen from Matterhorn Apartments.

All of the vehicles were left unlocked with the keys inside, Lemoine said.

PNPD was called at approximately 4:42 a.m. Saturday for a possible auto burglary at Matterhorn and while police were on the way, the witnesses started to follow the vehicle.

When the driver noticed, he began to speed, the chief said. Officers located the vehicle on Nall Street and the chase began.

Niklas Boutte, 18, and John Foutz Jr., 17, both of Beaumont, are charged with evading arrest detention with a motor vehicle with bond set at $30,000 for each man.

Police believe the suspects used a vehicle stolen from Beaumont and drove to different areas of town, where they would get out and pull on car doors until they found one unlocked. Police believe the males would steal items from the unlocked vehicles.

Lemoine said some of the stolen vehicles were found in Beaumont.