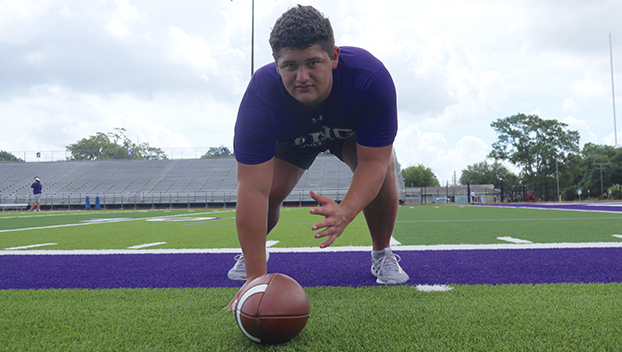 The incoming senior lost his stepdad to COVID during the 2021 season.

“It was hard, but we had great coaches and a great team,” Loftin said. “Football practices were where I wanted to be when all of that stuff was happening. I was surrounded by great teammates, friends and family. I would show up and get treated normally. It was a family. Nothing was different, and that was how I wanted it to be.”

That wasn’t the first time Loftin dealt with a loss. His biological father died from a heart attack in 2008 when he was 4 years old.

“I was young, so it was hard to remember,” he said.

Loftin said it is difficult to see his younger brothers deal with the loss.

“I have a little brother, who is 5,” he said. “It hurts every day. Since my dad died when I was young, (my stepdad) was my real dad. It just sucks seeing my little brother deal with it. I have another middle school brother, so I had to step up and be the man of the house. I think that has helped me with football, too, by maturing.”

Loftin stepped up on the field, too. He is coming off an impressive season. He played center on a dominant offensive line that helped PNG make it to the third round of the playoffs. Loftin’s performance earned him an honorable mention on the 5A Division II All-State team.

This year Loftin will be on the opposite side of the ball, starting at nose guard. While his position has changed, his expectations for the team are as high as ever.

“We want to be district champs,” he said. “That is our expectation, along with a deep run in the playoffs.”

“It has been great,” he said. “Coach Joseph is a really good coach, and we love him.”

The incoming senior also adjusted to his new role on the team.

“It has gone good,” he said. “It is different. I played o-line my sophomore and junior year. We have good coaches. I played on defense my freshman year and middle school.”

Loftin wants to replicate some of last year’s accomplishments.

“I made first team all district at center, so I want to do that at nose guard,” he said. “I think that would boost my resume and get me a little more respect. I would like to make the all-state team this year.”

Loftin’s favorite memory of playing for PNG is the team’s blowout win over Galena Park.

While he is not part of the unit anymore, Loftin said PNG has the best offensive line in the district.

“I know I have been struggling at practice just learning the new position, but at the same time I know I am going against the best line in the district and maybe in the state,” he said. “We got some big boys and good talent.”