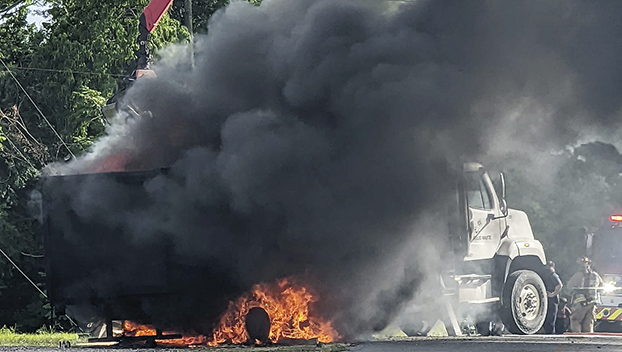 A City of Port Arthur employee was sent to the hospital after the boom, or arm, of the trash truck he was operating came in contact with power lines.

City Manager Ron Burton said the man was treated and released from the hospital Wednesday night.

Port Arthur resident Andy Sanford was on his way home when he saw the truck in the power lines and the vehicle on fire on Procter Street near Duff Avenue.

Sanford snapped some photos of the dark black smoke, fire and truck. He also saw paramedics with a person on a stretcher. 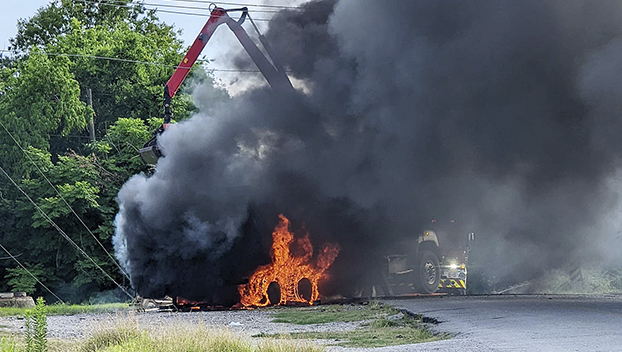 The driver of the trash truck was treated and released from the hospital. (Photo courtesy Adam Sanford)

Entergy disconnected the power, and by 8 p.m. Johnny’s Wrecker had towed the truck away, according to Sanford.

Port Arthur Fire Battalion Chief Jeremy Holland said the call came in at 5 p.m. Wednesday for the vehicle fire in the 5300 block of Procter Street.

Holland said the case remains under investigation but also said it appears the truck made contact with a power line.

The city has made accommodations to handle the workload now that a trash truck is out of commission.

“I have already instituted measures to insure we have a replacement in terms of service for few days or weeks,” Burton said.

“In the interim measures have been put in place so the schedule is not adversely affected and service continues. This was immediately done this morning.”

The contract is part of an ongoing attempt to alleviate issues with garbage pickup.