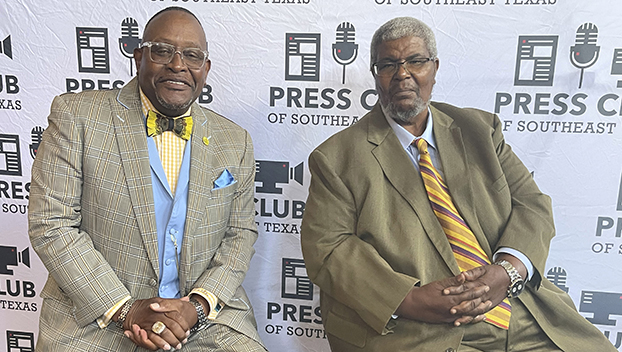 Mayor Thurman Bartie, left, and Floyd Batiste participated in a debate in May hosted by the Press Club of Southeast Texas. (Monique Batson/The News)

With early voting beginning this week, Mayor Thurman Bartie and opponent Floyd Batiste have been out at polling places talking with residents ahead of the June 11 election day.

Batiste, who served 17 years as the CEO of the Port Arthur Economic Development Corporation, said a similar thing as he sat at the Port Arthur Public Library on Tuesday. 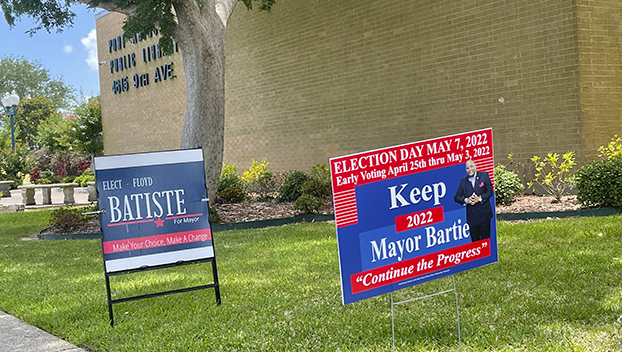 Signs are posted outside the Port Arthur Public Library, where early voting began this week in the mayoral runoff. (Monique Batson/The News)

“It’s pretty steady,” he said. “Being the fourth election in 60 to 70 days, I did not expect this many people to come out.”

Early voting began Tuesday and garnered 518 votes, according to information from the Jefferson County Clerk’s Office.

In the May 7 election, 3,021 votes were spent among the four candidates between early voting and election day.

“That’s really good,” Bartie said in response to Tuesday’s turnout. “If we get another 200 (Wednesday), we’ll be close to 800 people.”

But, he said, more votes are needed.

Batiste, who at the start of the runoff said his main goal was to make sure more of the public recognized him instead of just knowing him as a public figure, said he feels he’s achieving that goal.

“I think I’ve done a good job of getting the word out,” he said. “People know that I’m running. It’s up tot the people if they want to make a change.”

Bartie said people seem eager to participate in the election.

“Hopefully I can get a good majority,” he said. “That’s why I’m working, sending mail-outs, doing commercials — everything I did the first time to come up with at least 47 percent.”

The candidates both addressed their platforms in previous discussions with Port Arthur Newsmedia.

Bartie said he is focusing on infrastructure, while Batiste said communication and transparency are key.