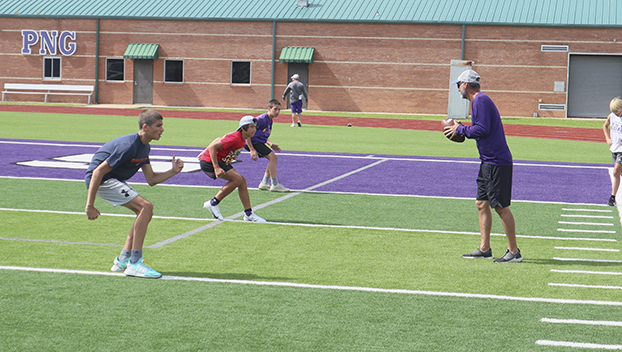 Lineman Bryce Loftin remembers what is was like to be in elementary school and see varsity football players at the camps. Loftin was one of a few PNG football players helping with drills Wednesday.

“It is a lot of fun,” he said. “I remember being a little kid like them and thinking that I couldn’t wait to be (like the varsity players). Here we are.”

Campers split up into positions and went with their respective coaches to work on some fundamental drills.

The camp was the first for new Head Coach Jeff Joseph.

Joseph said the varsity players were there on their own accord.

“Those guys came out because they remember what it is like to be those kids,” he said. “It means something to them to be out there and see them.”

Joseph said the camp also allows him to get closer to the community. He was hired to take over the program earlier this year.

Joseph, who has coached defense his entire career, wandered around to different defensive drills this week. He primarily worked with defensive backs on proper footwork and ball skills.

“We are teaching the basic skills and fundamentals,” he said. “We have three or four coaches on staff that have their kids out there, too. They know the importance of being a part of the community. They have their own families. They know how they would like their kids to be treated at camp.”