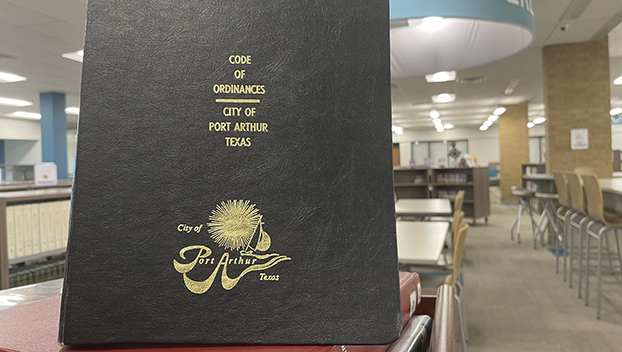 The City of Port Arthur’s existing Code of Ordinances is available to view at the Port Arthur Public Library. (Monique Batson/The News)

After years of working with committees and an engineering firm, the City of Port Arthur is preparing to overhaul its zoning ordinance for the first time since the 1970s.

Tuesday the City Council and Planning and Zoning Commission met in a joint public hearing, and approved a motion to allow the commission to prepare a final report for council on a new 147-page plan.

“We’re at a place we have not been since 1973,” said City Attorney Valecia Tizeno.

Assistant City Manager Pamela Langford said when looking at adjustments, the committee put focus on Pleasure Island as it currently is and what it could be in regards to future use.

Recently voters approved a proposition to sell a near 36-acre plot of land on the island that had been zoned as a park. The ability to sell the land opens it for development.

“We also took into consideration properties near the causeway bridge into Cameron, Louisiana,” Langford said. “There are a lot of residential (areas) near that property.”

Measures were added, she said, to protect residential zoning.

According to a city document, other items looked at in the new plan include changes to zoning regulations and district boundaries; changes affecting height and the number of stories and size allowed for buildings and structures; changes to the percentage of a lot that may be occupied; changes to population density; changes to the location and use of buildings; and the reconstruction, alteration and razing of buildings.

The new ordinance will also outline the rules for sexually oriented businesses and gaming sites.

“Those were all put in a proper place where it wouldn’t interfere with residential life,” Tizeno said.

Councilman Donald Frank asked if the new guidelines will address fencing for residential areas not under the guidance of a homeowners association.

“We have seen in our communities where people have put chain link fences where that is not the norm for that community,” he said.

Langford said there are restrictions regarding the types of materials that can be used for fencing, but not barring types of fences in general.

Johnny Brown, a member of the Planning and Zoning Commission, said the goal is to bring needed updates to current guidelines.

“The effort now is to make sure the ordinance and the rules in place are consistent with the current situation, to the extent in some cases there have been adjustments that don’t fit or connect with the expectation from 49 years ago,” he said.

“Now our city seems to be moving into the 21st century,” she said. “…We have a working document that people can say Port Arthur is now getting where we need to be …”