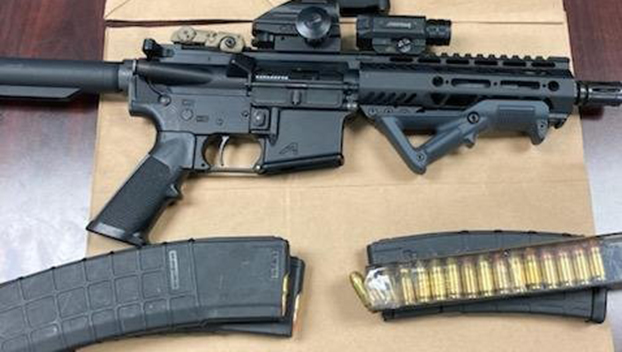 The Port Arthur Police Department released this picture of a gun and ammunition police say were recovered from a Monday traffic stop in the city.

Three men that were arrested by police in Port Arthur on weapons charges and “an extraordinary amount of ammunition” have since bonded out of jail.

On May 23, Port Arthur Police Department’s Guns and Narcotics Unit made a traffic stop in the 200 block of Gulfway drive because a motorist failed to signal intent to turn.

“The driver and owner of the vehicle gave officers consent to search,” a PAPD release said. “During the search, four handguns were located and seized, along with an extraordinary amount of ammunition.”

Police said three of the firearms were found in the back-passenger area.

All three back passengers were prohibited by law from possessing firearms and were subsequently arrested, according to police.

Jordan Malik Bronnon, 26, was charged with felon in possession of a firearm with bond set at $15,000. He was released May 24.

Rashad Shaquille Carter, 29, was charged with unlawful possession of a firearm and failure to identify. Bond was set at $1,000 on each charge and he was released May 26.

The driver and front seat passenger were released at the scene.

The case is being submitted to the ATF for review, according to PAPD.