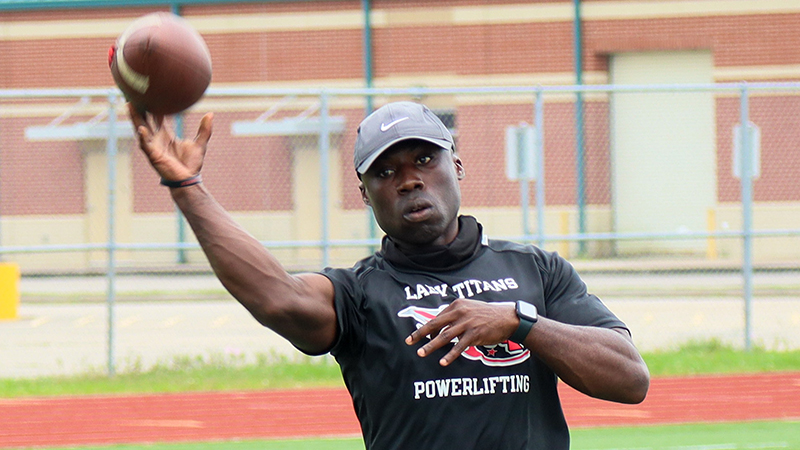 Memorial offensive coordinator Rashard Colquitt will take on the same role for Aldime Nimitz in the fall.

Colquitt called the offensive plays for the Titans during their district title run in 2020 and when the team won a share of the district title last year.

Colquitt and his wife had a baby earlier this year, and the move puts the family closer to both grandparents.

Under Colquitt’s supervision, the Memorial offense was the best in District 9-5A Division I for the past two seasons.

“I think that 2020 season when we brought the first district championship to Memorial was big for us,” Colquitt said. “We saw the hard work the kids put in. Coming off COVID, things were crazy. We didn’t know if we were going to have a season or not. Being the first team in Memorial history to bring an outright district championship was a blessing. That is one of my biggest memories.”

“I learned the love for kids and seeing them get better,” Colquitt said. “I saw the relationships Coach Harrison had with the kids and the way they gravitated towards him. He did everything in his power to get them to the next level. Then I worked with Coach Morgan and saw how he loved the community. I think both of them being from Port Arthur made them want to see the kids better themselves. Working for them two made me love the community and do everything I could for the kids.”

Morgan said he is grateful for being able to work with Colquitt.

“He was incredibly consistent with the kids on the field and in the classroom,” Morgan said. “He was a really good guy and reliable. If you assigned him something, he was always going to get it done. That is one thing I can always appreciate. At some point, you know people are going to move on. That is part of coaching these days.

“It was a really good family move for him. I definitely didn’t want him to go by any means. I wish him the best.”

Morgan said the addition of Graham helps the staff. The former Beaumont United head coach ran the Timberwolves program for two seasons. Graham was reassigned at BISD after he was named a finalist for the Jasper head coaching position earlier this year.

“He has been around some really good programs as an assistant,” Morgan said. “He was at Duncanville. Duncanville is similar to what we have. It is the same kind of environment and structure. There are a lot of similarities. He is a guy we can bounce some ideas off of about things that are done well or things that can be done better. Anytime you can hire multiple head coaches, that is a good thing for your staff.”