MONIQUE BATSON — How did it become necessary for our children to train for massacres? 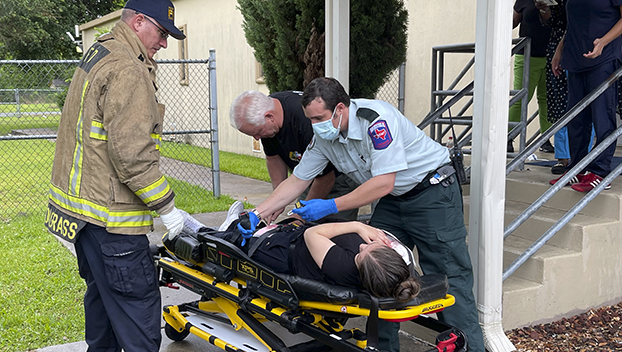 First responders take Suzanna Alvarez out of school on a stretcher Tuesday during a mass casualty drill in Port Arthur. (Monique Batson/The News)

One of the first things I saw Tuesday morning was a teenager with a gunshot wound lying in the floor of a high school hallway.

While the blood on his chest was not real, he laid like a trained actor, motionless with eyes half closed.

And immediately, I was undone.

I had been looking forward to the active shooter drill at Tekoa Academy of Accelerated Studies STEM school when I learned they would be implementing Stop the Bleed, a national initiative that teaches students and community members how to render first aid in the event of a disaster. I first learned of it in 2019 while in West Texas covering a mass shooting. The program was credited for saving lives the day 33 people were shot.

What I did not expect Tuesday was to see a drill done so realistically, students were being carried out of the high school on stretchers. Some were applying pressure to the wounds of others. Police officers secured the scene. Ambulances were lined around the school. And one child rested in the arms of a classmate, sporadically pulling her fingers from her neck to reveal blood. Neither smiled.

While there are times I’ve been unable to hold tears while on assignment, I remained composed until I got into my car.

The way the two girls had been sitting together was almost identical to two teenagers I spoke to at a vigil after their 15-year-old friend died in Odessa while at a car dealership with her brother. There with 1,000 others to mourn what happened just two days before, the students cried and held each other near handmade signs that displayed the name of their late friend.

And remembering that day and those that would follow, I cried in my car for at least five minutes.

When Mary Meaux got a phone alert about a shooting at a Texas school, her first thought was that someone had misunderstood what had happened at Tekoa not long before.

“Wait, this is an elementary school,” she said.

Like everyone else, I was destroyed by the 2012 shooting at Sandy Hook Elementary School. So the moment I heard “elementary,” I knew to shut down all social media until I got home.

Once I sat down and began to read, my son walked up to me and said, “What are you reading about? Oh, wait, that’s the school shooting, right?”

I told him, ‘yes,’ and he spoke briefly about it before asking, “Also, did you see any of the Johnny Depp, Amber Heard trial today? It was crazy.”

Immediately I looked at him wondering how he could even think about a celebrity trial when people were quite literally at that moment pulling the bodies of children out of a school.

But he wasn’t being insensitive.

To him, it was just another day.

I didn’t grow up with school shootings. I was a senior one month from graduation when the Columbine High School massacre happened. We practiced drills for tornadoes that never came and fires that never ignited. Occasionally we’d have a bomb threat, but we never considered it could be real.

My children grew up learning how to bar a door if they hear gunshots.

They practice drills where they lock the door, turn off the lights and remain silent.

Seeing police officers at their school is expected.

The first thing I did this morning when I woke up was look for updates on the Uvalde shooting. My older son went to the gym with his friends.

When I had my first child, I never once thought they would grow up trained for massacres. And worse, I never thought I’d be glad that they are.

But this has to stop.

Please don’t make my children use their training.