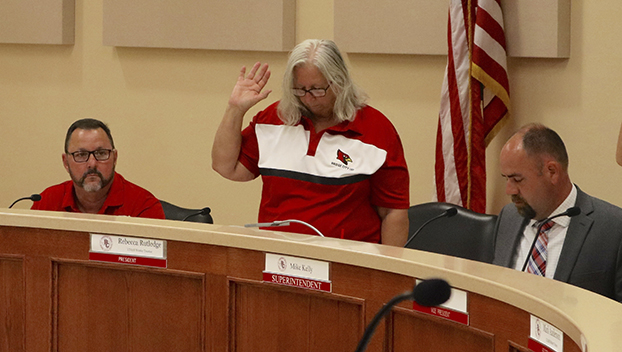 Becky Rutledge is sworn in as president of Bridge City ISD school board. (Chris Moore/The News)

BRIDGE CITY — Bridge City Independent School Board members voted to keep Becky Rutledge as the school board president this week.

Rutledge, who won her election earlier this month, is excited for the next few years in the district.

Returning board members were sworn in this week at a regular meeting, and the board voted on titles.

Rutledge said the district hiring Superintendent Mike Kelly was one of the most important done over the last year.

The district voted in favor of a bond that will build a new middle school and CTE building over the next few years.

Kelly previously told Port Arthur Newsmedia the goal is to be in the new buildings by August 2024.

Rutledge said the district will be in construction mode over the next few years.

“Both buildings were very badly needed,” she said. “I just can’t hardly wait to get those built and get the kids in them. It is a long process. The passage of the bond is just the beginning. Now, we start the design phase and the bid phase. I am thinking our time will be consumed with construction projects over the next year or so.”

She said the teachers, staff and students are what allow the district to continue to strive for greatness.

“It is always a great day to be a Cardinal in Bridge City,” Rutledge said. “Our kids excel at almost everything. Following them in their paths of success has always been a joy. Our band is performing at the state level. Our softball and baseball teams are always in the playoffs. We look forward to our schools letting out next week. We will have a short, brief summer and then it will start over in the fall. It is exciting to be a part of it.”

The last day of school is Thursday, and school will restart Aug. 10.