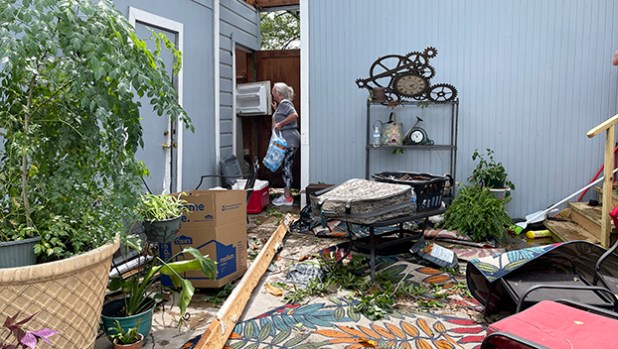 Carla King cleans up around her Port Neches home after it was damaged Wednesday morning, leaving it uninhabitable. (Monique Batson/The News) 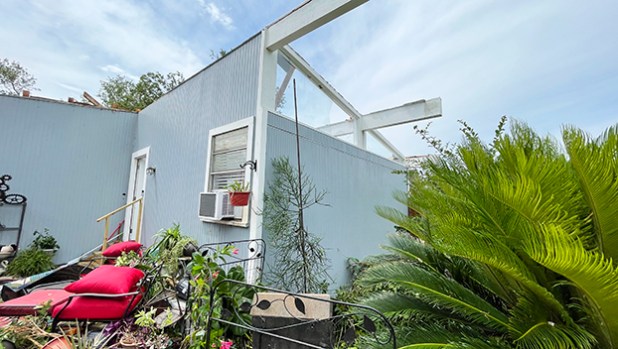 Part of Carla King’s house on 15th Street no longer has a roof. (Monique Batson/The News) 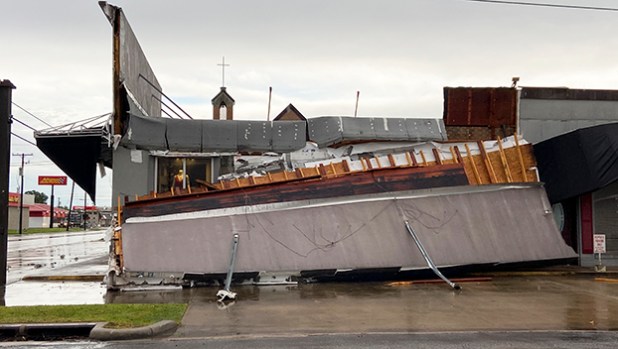 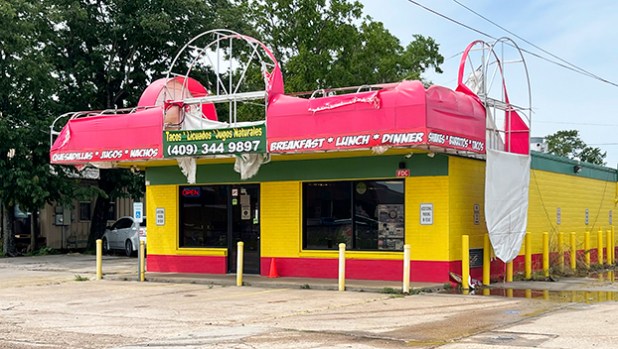 Banners were torn from the top of La Salsitas Express in Nederland. (Monique Batson/The News) 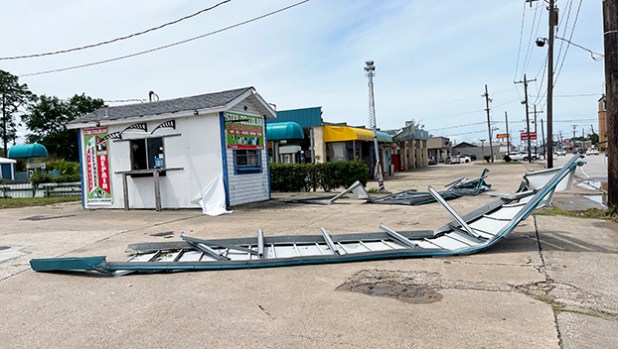 Debris from Wednesday morning weather can be seen near the corner of Nederland Avenue and Twin City Highway. (Monique Batson/The News)

PORT NECHES — Carla King has lived on 15th Street in Port Neches for 21 years without ever being forced out by a weather event. Wednesday afternoon, she and members of her family were packing up the contents of the home that largely has no roof.

“Do you how many hurricanes I’ve been through?” she said while filling boxes near her front door. “After Rita, this was a double carport. And (one) side of the carport was down. That was Rita. I’m just blown away.”

“We were all still asleep,” she said. “It was my husband, my daughter and me. All of a sudden I just heard this loud noise. And I can’t tell you what the noise sounded like, it was just a loud noise. And then I heard some wind.”

King hid in the closet and prayed.

“It happened so quickly,” she said. “After the wind stopped, I came out and went to check on them. They were still in bed; they were good. Everything was fine. And then as I was coming through the house…that was when I saw the roof was gone.”

Sheetrock had fallen and blocked the front door, prompting her to call 9-1-1.

Port Neches Police Chief Paul Lemoine said police officers and members of the fire department were on scene to remove the residents of the home.

While King’s house was the only one on her street to suffer catastrophic damage, a number of residents and businesses throughout Port Neches and Nederland were damaged.

The National Weather Service in Lake Charles said it is sending someone to the area to determine if it was the result of a tornado during an early morning storm that also dropped as much as 3.5 inches of rain near Port Arthur.

“We had a line that moved through this morning, and that’s probably where most of the rain came from,” Meteorologist Montra Lockwood said. “It was pretty heavy at times.”

More rainfall is expected this evening.

With more bad weather on the way and no possibility of staying in her home, King worked quickly Wednesday to fill boxes and empty refrigerators.

“I just need to know my next steps and progress,” she said. “All I care about is that we’re OK. God was watching over us.”

Rain and potential thunderstorms are expected after 4 p.m., with potential wind gusts up to 20 miles per hour, according to the NWS.