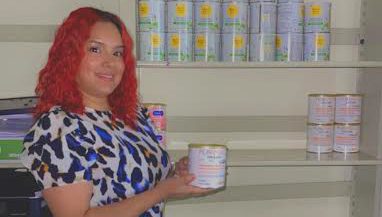 Iesha Martinez, office and billing manager at Children’s Heath Center, holds some of the formula in their formula bank. (Courtesy photo)

A Port Arthur pediatric nurse practitioner is looking to help with the formula shortage.

Sarah Dubose with Children’s Health Center announced this week they are opening a formula bank.

Iesha Martinez, office and billing manager, said that those needing formula can text their name and which formula they need to 409-658-5663. The name will go on a list.

In addition, they are letting parents know they have the equivalent of the formula they need but should get with their pediatrician in case there are questions about the formula.

“Since Monday we had about 70 text us and so far have helped at least 34 and some are still coming today to pick some up,” Martinez said Friday.

The office, located at 3220 Central Mall Drive, is also accepting donations of formula from 9 a.m. to 4 p.m. Monday through Thursday.

Martinez said they have heard from parents who are thankful for the formula, some of whom are traveling to Lake Charles, Louisiana, in their search.

The office receives samples of formula, which are being held for those in need.

Staff at the office will even purchase some to bring to their office to give to parents in need for free.

The shortage of formula is affecting parents across the nation.

According to information from the Texas Tribune, parents have since February been struggling to find baby formula after one of the four major manufacturers issued a recall in February, subsequently closing one of its plants.

Texas, in particular, has seen approximately 52 percent of baby formula run out of stock since May, according to the retail software company Datasembly.