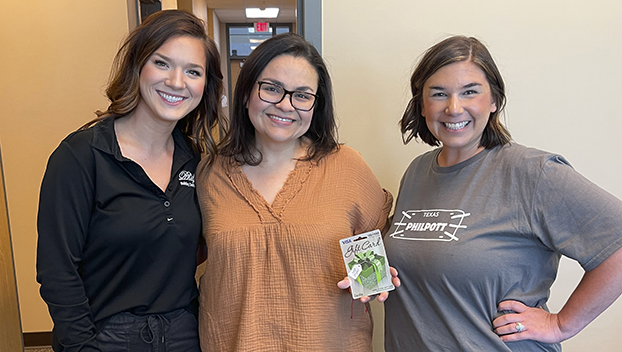 Charity Allen, left, and Jill Hebert, right, with Philpot Motors, present Maureen Padilla with a $500 gift card for being selected as Teacher of the Month. (Monique Batson/The News)

GROVES — Maureen Padilla began her career as a nurse. But after taking some time to stay at home with her children, she took her knowledge of Spanish and love for children into education.

And it was as an English-as-a-Second Language instructor that she found her true purpose.

“I love working with children in general,” she said. “I just like working with that population, helping the kids get used to being in a new country or learning a new language. That’s just been something I’ve always like to do.”

Padilla was selected as the May Teacher of the Month sponsored by Philpott Motors. The mother of four was surprised this week on campus with a $500 gift card.

But she spoke humbly of the work that earned her the nomination, saying her biggest challenge is trying to be the best influence she can when it comes to her students at Groves Middle School.

“For me, the hardest part is where I have a child that feels like they can’t succeed, and I want to make everything perfect for them,” she said. “I want to help them, but I can’t make them learn. I want them all to be successful, and I want to be that person for them — that support system in case I am all they have. It’s hard if I can’t reach every kid.” 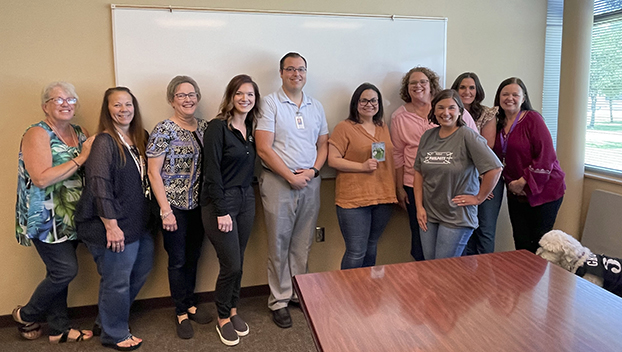 Padilla grew up in a bilingual household, where her parents spoke in both languages. She said when she entered the education field, working in ESL was an easy choice.

But it hasn’t been without challenges, she said, speaking of the biggest challenge for the students.

“Their confidence,” she said. “Having them feel…embarrassed or shy, feeling like they can’t do what everyone else can when they can. You just have to be their support system here at school.”

All ESL instructors in the Port Neches-Groves Independent School District work together.

“The love, passion and the dedication she has for her emigrant bilingual students and their families shines everyday,” District ESL/Bilingual Coordinator Roxanne Ferguson said of Padilla. “She is amazing at making lifelong connections and relationships that shape the future of her students. Maureen is an amazing educator with a huge servant heart.

“She is always willing to go above and beyond what is needed to make sure that her students, the faculty and staff at Groves Middle School have what is needed for all to be successful. Our district is very blessed to have her on our team”

Padilla said recently she assisted with a field trip at Groves Elementary, and was then able to meet the incoming sixth graders she’ll be working with next year.

Some come to the middle school with knowledge of English, while some are starting from the beginning.

“It’s from all different ways,” she said. “We have some that just come rolling in from Port Arthur, from another state, or from Groves Elementary School. Some of them come and in a matter of a couple of years, they’re fluently speaking English. And then there’s some that have that underlying issue or something else going on, and it takes them that much longer to learn English.”

But the benefit of helping the children reach more than just that student.

Padilla also works with the students’ families, and in some cases finds the parents are also working to learn a new language.

“We have a girl this year going to high school, and she’s struggling to learn her English,” Padilla said. “And when we met with the mom and dad…one of them (suggested) we do some English classes over the summer together because the mom wants to learn. So I’ll get something together for the daughter so she can continue learning English over the summer. Instead of going into summer school, we’ll do a specialized packet with websites and programs, and have her be able to do that along with her mom.”