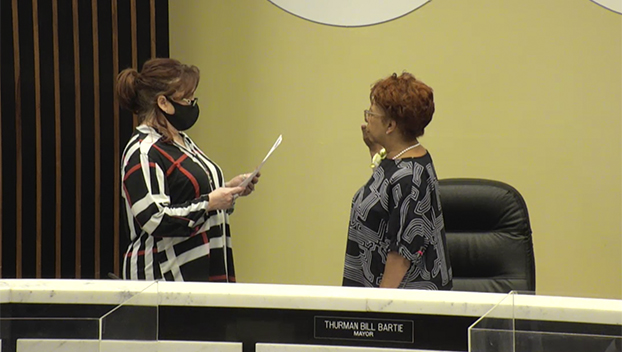 The City of Port Arthur has a new mayor pro tem, who conducted her first meeting Wednesday after being sworn in.

The special session was scheduled to elect a new mayor pro tem, and also to formally declare the results of the May 7 general election.

“Congratulation on your mayor pro tem seating,” Council Cal Jones said after City Secretary Sherri Bellard gave Holmes the oath of office. “Donald Frank did a heck of a job in the absence of the mayor. He was always there for us. Thank you for your service.”

Holmes’ first order of businesses was an ordinance canvassing the returns and declaring the results of this month’s elections.

It also acknowledges the need for a run-off election, currently scheduled for Saturday/June 11. Early voting begins Tuesday/May 31 at the Port Arthur Sub-Courthouse and the Port Arthur Public Library.