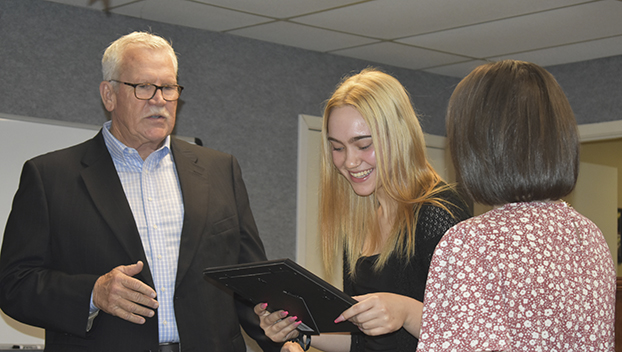 Aslynn Achord reads a certificate naming her the recipient of the Shining Star Award while standing next to the tools and tool box given to her during Wednesday’s presentation. (Mary Meaux/The News)

A local student is set to graduate with her class next week after turning her life around.

Aslynn Achord collected more than 23 referrals and struggled with discipline problems in her freshman year at Port Neches-Groves High School. She was guarded, somewhat defiant and hanging out with the wrong crowd.

Then she made a positive change in her life and created avenues for success.

For that she earned the Shining Star Award, presented by Justice of the Peace Brad Burnett Wednesday morning. 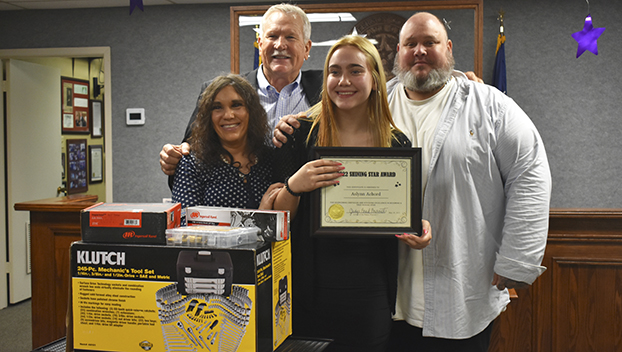 Jon Deckert, director of student activities at the high school, told her story to a crowd consisting of family, friends and school officials. He focused on the positive.

“She is fully employed at Sonic. She has her own apartment, pays her own bills, cooks her dinner every night,” Deckert said. “Does that sound like a high school student? No, that sounds like a shining star.”

The Shining Star Award is given annually to a Mid County high school student for overcoming challenges and taking advantage of opportunities that result in a major turnaround. Students are nominated by a teacher, counselor, school police officer or principal from the respective high schools.

Brett McPhatter, curriculum coordinator at PNGHS, was one of the many who nominated Achord.

“Aslynn is a prime example of what resilience and grit look like in a person. Her never-give-up, never-surrender spirit has allowed her to achieve goals beyond her own imagination,” McPhatter said in the nomination. 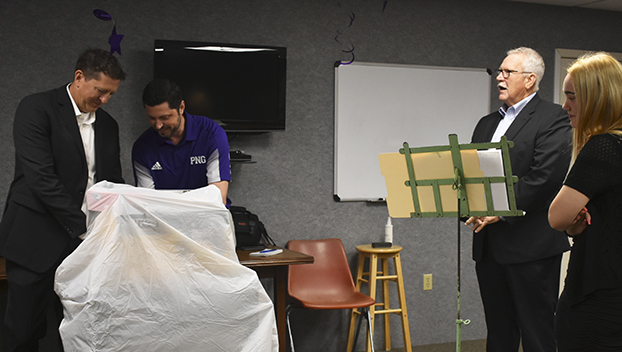 Her mother, Spring Gipson, said Aslynn had a drive even as a child, as well as leadership qualities.

Achord received more than the accolades and her name on a plaque that hangs outside Burnett’s courtroom.

Port Neches-Groves Independent School District Trustees and local businessmen Eric Sullivan and Dallon James presented the soon-to-be graduate with $800 worth of tools and a rolling toolbox.

Deckert referred to the 1985 movie, “The Breakfast Club,” while speaking.

“You’ve got five wayward kids. They go to school and whatever choice they made they’ve got to serve detention. And, with no help form the adults they figure it out,” Deckert said. “Well, that’s not what PNG is about. PNG is about the adults helping the kids figure it out.”

And that’s when another adult stepped up with more gifts. Philpott Motors General Manager Daren Granger gave her a job starting out as a lube technician at the business and said Philpott will pay for her education as she enters an apprenticeship program to become a certified master mechanic.

“We want to do this because you deserve this,” Granger said.

The blond haired, soft-spoken Achord was thankful for all she received, including the kind words and encouragement.

“I never thought I’d get an award like this for anything. It just feels special,” Achord said.

She gives credit to her boyfriend, Nicholas Hotchkiss, for helping her make the positive change.

“He helped me get my life together, set goals and have something to look forward to,” Achord said. “He really helped me turn my life around.”