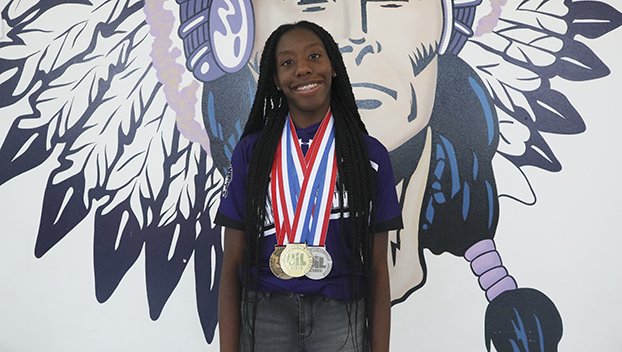 “I just keep staring at them,” she said.

As she walks, the gold, silver and bronze medals clang together. And she has earned every second of it.

After failing to make it to state in any track or field events last year, Bulter set a goal to punch her ticket to Austin in 2022.

On Friday Butler walked out of Austin with a medal in every event in which she competed.

Butler said she had a feeling she could medal in each event, but was surprised by how the day unfolded. 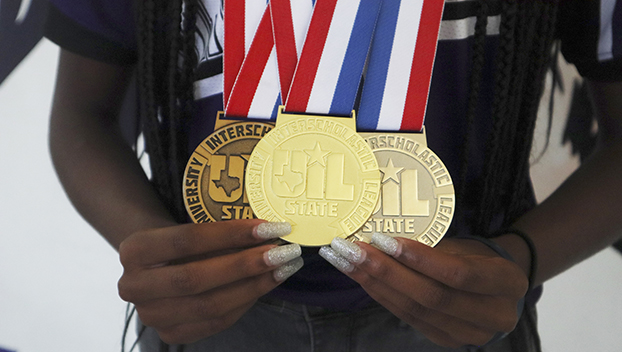 Sanaria Butler earned a gold, silver and bronze medal for her performance at the state track and field meet. (Chris Moore/The News)

Her day started off hot with a gold medal in the first event.

“I did everything I could to get here,” she said. “When I was looking at everything, I knew I could medal, but I didn’t think I would get first in the long jump. I thought it would be the triple jump or the long jump.”

Butler’s first jump was the one that won the competition with a leap of 19-07.75. Then she had to wait.

“It took a little bit for it to play out,” Track Coach Jesse Farmer said. “We were never comfortable. We still had five more jumps, and the other girls did, too. It was a waiting game. It was a lot of going back and forth to the bleachers to talk to her and figure out what we were going to do.”

Farmer called the day a whirlwind, but said having so many events helped the proceedings go by faster.

Butler said she had an hour to celebrate her gold medal between events.

“We went to go eat and then I had to go get focused for triple jump,” she said.

She came in third in the triple jump and headed back to the hotel to cool off from the scorching Austin heat in preparation for her 400m dash.

“I just laid down,” she said. “I was too nervous to go back to sleep,” she said.

To complete her medal trifecta, Butler ended the day with a second-place finish in the 400m dash.

Butler is taking this week to rest before preparing for summer track with Jacobs Sports Academy. In the fall, she will join PNG teammate Cyrus Jacobs Jr. at Northwestern State University.

“To see someone who has worked so hard and wanting this since she started running track in middle school was amazing,” Farmer said. “We are so proud of her and we are happy she was able to experience that.”