Meet Memorial High’s cadet unit, which ranks as one of highest in nation 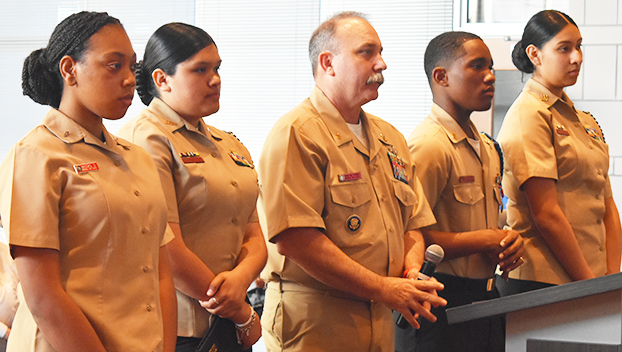 The cadets enrolled in Navy Reserve Officers Training Corps at Memorial High School make up one of the top units in the nation.

Emys Torres Cappas was not in attendance but is part of the group.

The instructor explained the average test score was 78, and all of Memorial’s students scored above that margin in the exam. Brooks scored a 91, which was one of the highest scores.

Each unit is required to field one team of five cadets but can field as many as five teams. Fulbright said out of the schools participating in Texas, only one scored higher with first and third place wins.

“We are so proud of our cadets, and this is the highest we have ever finished in our history,” Fulbright said. “This would not have been possible without our cadets receiving a quality education and instruction from professional teachers throughout their education. Too many times we focus on the athletic community and forget that there are some stellar individuals who are excelling in the academic phase of life.”

He called this the capstone of what has been a very successful two years during COVID pandemic.

Fulbright said the cadets will go to Basic Leadership Camp in June.

Trustees were congratulatory of the group and wished them the best in their future.