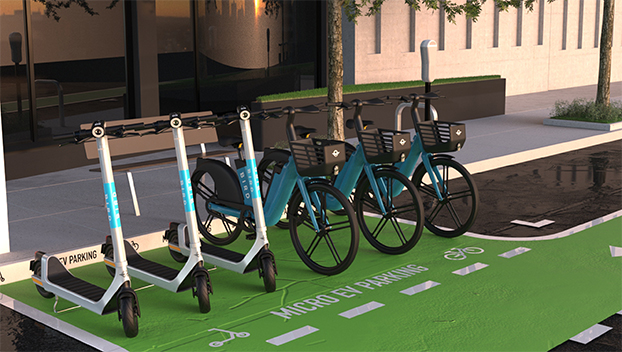 The company that put Bird Rides in Beaumont this year has reached out to Port Arthur to launch a pilot program. (Courtesy photo)

A California-based company formed to provide cities with environmentally friendly transportation is hoping to bring their electric vehicles to Port Arthur.

Mike Butler with Bird Rides recently pitched city leaders an offer to launch a pilot program similar to that adopted in Beaumont in March.

“Before we get into kind of what we do, I think it’s far, far more important to understand why we run our business, why we started this business and why we do what we do,” Butler said. “And it really is to improve our communities, and of course, improve the lives of the people that are within those communities. How we do this is by being a transportation company.”

The company provides electric scooters and bicycles at no cost to participating cities, Butler said. The cell phone app-based service allows riders to sign a user agreement, verify they’re over the age of 18, insert a payment method and complete a series of videos and tutorials on riding the vehicles and understanding related laws.

There is a $1 charge to unlock the vehicle, and pricing, Butler says, is about 30-35 cents per minute.

They are tracked with GPS and can slow down or stop entirely if they reach an area of the city marked as prohibited by city leaders.

“I think the general perception about something like this is that it’s only really done in really big dense urban metropolitan areas like San Antonio and maybe the Chicago and Los Angeles,” Butler said, adding the program operates in cities with 5,000-15,000 residents by adjusting the operation to meet the market.

“That’s what we would do in Port Arthur, that’s what we did in Beaumont,” Butler said. “And so far the reception has been hugely positive.”

The vehicles, which have a maximum speed of 16 miles her hour, would only be ridden on streets.

Councilman Thomas Kinlaw asked Butler if the vehicles shut down at certain periods of time, or if they run 24 hours per day.

Butler said that is dependent on the receiving city. Beaumont, he said, operates at 20 hours – 4 a.m. to midnight.

They are charged, repaired and maintained by local people employed by the company.

“We started this a couple of years ago as the first company in the world to do this idea that was pretty new and pretty fresh at the time,” Butler said. “We’ve expanded from being live in just one city to now being live on multiple continents. That includes a couple of dozen countries, 400 cities.”

When the program launched in Beaumont, Mayor Robin Mouton said, “We are happy to welcome Bird to Beaumont and look forward to having scooters available. Not only are they an exciting new way to get around, but they’re a viable transportation option for residents and a way to make the community more sustainable.”