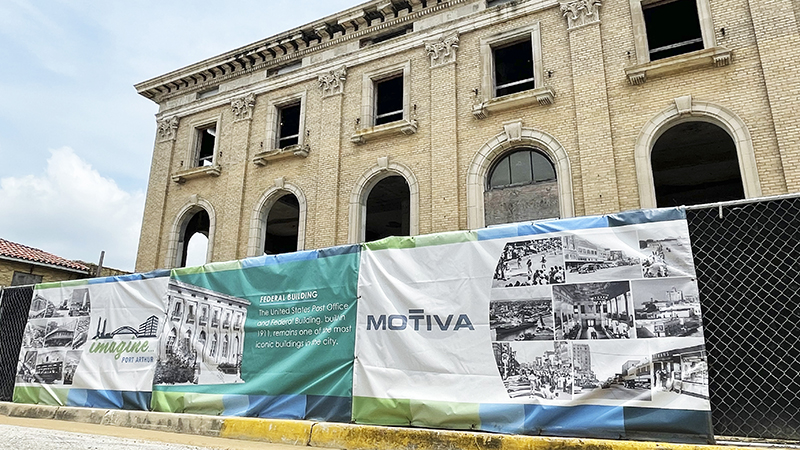 For the second time in as many months, Motiva Enterprises reiterated its intent to continue a downtown revitalization project first unveiled in 2019.

Company spokesperson Claire Jackson was requested to appear before city councilmembers last week but was unable to attend in person.

“Motiva is committed to downtown Port Arthur as the future home for much-needed office space,” Jackson wrote in her statement. “We are working with architects on the design and addressing changes that have occurred in the last two years. We are (hoping) to have a better project scope and timeline in the near future.”

“There was a lot of excitement around that, but then, the pandemic happened,” Lucchesi told the crowd. “Like a lot of other companies, we were struggling mightily, as the industry was, and we put that project on a slow roll. As I said, industries turn around and, God bless, Motiva is doing good. I am proud to say Motiva is going to be bringing that project back to the front and center.”

In 2017, Motiva announced it purchased the Adams Building and Federal Building on Austin Avenue to renovate into office buildings for more than 500 contractors and personnel. In addition, the company said it would be investing in a $12 billion expansion of the Port Arthur refinery to bring in as many as 12,000 jobs.

The project was originally expected to end in the first quarter of 2022, but last year was extended to 2023.

Motiva also purchased the building currently holding the City of Port Arthur Public Health Department, which will be moving to 9th Avenue.

Under that agreement, Port Arthur could begin leasing the building from Motiva for $12,000 per month.