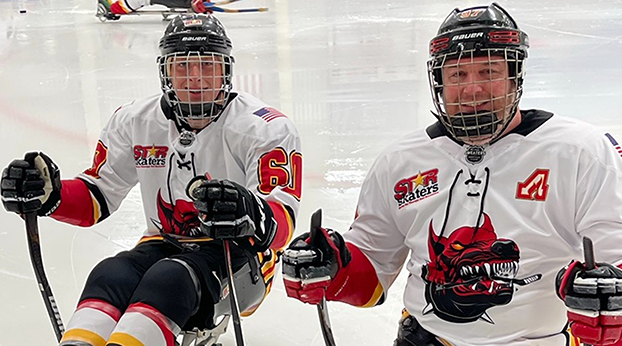 Port Neches native Joshua Yarbrough was a part of a championship team when the Las Vegas Golden Knights won the Tier II National Championship at the Toyota-USA Disabled Hockey Festival.

But Yarbrough’s time in sled hockey has brought him more than the joys of winning.

During a deployment in Afghanistan in 2011, Yarbrough, who was a Marine Sergeant, lost both of his legs when an IED exploded.

Yarbrough said the recovery process is emotionally draining. While recovering in San Antonio, he received the recommendation to try sled hockey.

“I thought contact sports were over for me,” he said. “I played golf for a little while. But there is a big difference between hitting a ball and hitting a person. It has been therapeutic.

“At the time, I tried it and played goalie but I wasn’t in a place where I was concerned with that. I just wanted to get my rehab done and leave.” 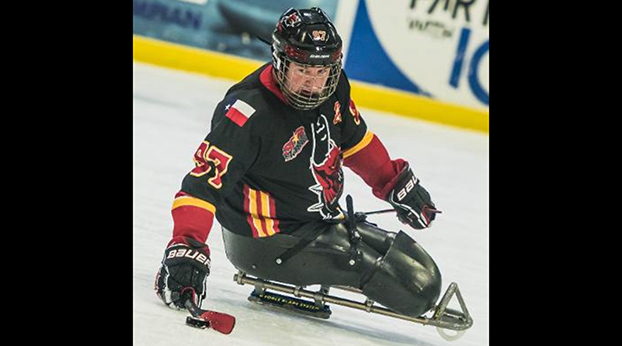 Yarbrough lost both of his legs in a IED explosion in Afghanistan in 2011. (Courtesy Photo)

About three years later, Yarbrough was sitting at his son’s football practice when he had an epiphany.

“I had about an hour and a half to kill and I realized I needed a hobby,” he said. “Hockey seemed like it would be fun. I found a team in Houston and got the contact information online. I was there the next Saturday and every weekend since when they have it.”

Yarbrough said he was hooked after the first practice.

“I got put at left wing,” he said. “That is where I played my first season. Then I got moved to defenseman. Now I get to hit people.”

Yarbrough’s team is the Houston Hellhounds, but the team hasn’t played in a while after the non-profit organizer died. Yarbrough was able to get out on a waiver to play with the Knights for the championship run.

The team provides friendships and the drive to stay in shape, Yarbrough said.

“Having the physical outlet is good,” he said. “It keeps me wanting to improve myself and stay in shape, because otherwise I would not.” 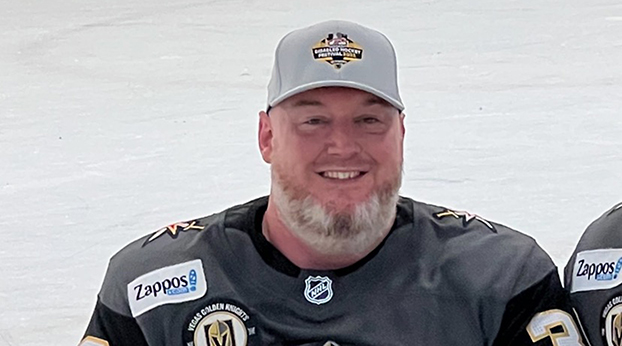 Yarbrough also gets to share his time on the ice with his 15-year-old son Sean, who had surgery for flat feet.

“At his age, they start pulling away and doing their own thing,” Yarbrough said. “After my injury, a lot of that relationship felt very strained. I have three kids now, but at the time, I only had him. He was 4 when that happened. I played with him all of the time. I had a lot of plans as a father of all of the things I wanted to do. I wanted to coach baseball and teach him all of these things. I can’t show him footwork for football. I can’t show him the footwork to swing a baseball bat. I can’t show him how to step into a throw. That was frustrating and that put a strain on our relationship for a long time. I felt like he was getting the short end of the deal.”

Yarbrough said having his son on the team has given them something to bond over.

“We go to practice and I hit him just like everyone else,” he said. “Hopefully, that will make him a better player at the end of the day.”

Yarbrough said he encourages anyone going through something similar to find some athletic activity to use as an outlet.

“If there is a sport you like, they probably have some version of it,” he said.

Those who would like to donate to the Houston Hellhounds can do so by visiting starskaters.org.