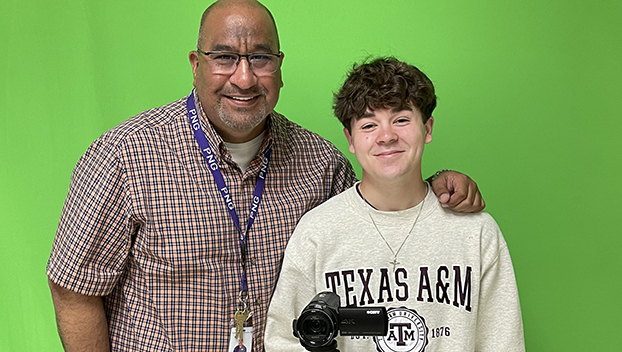 Braxton Doré is headed to Texas A&M this fall. But the courses he’s chosen for his future have changed from just one class at Port Neches-Groves High School.

“I got into the class and didn’t really know what it was about, and Mr. (Greg) Picazo introduced me to everything,” Doré said of PrimeTime, the school’s broadcast journalism class. “He showed me how to record on the field, and I fell in love with that — just capturing all of those moments and getting really involved in it. I recorded a lot and got a whole lot of good clips this year.”

And those clips, he said, will become his portfolio after graduation May 26.

Doré was curious about the class, but hadn’t been able to participate in the past due to his schedule. He had previously been heavily involved in soccer. Leaving the team for his senior year allowed time to try PrimeTime and still incorporate the sport he loves.

As part of the PrimeTime team, Doré films at games.

“We also go to all the basketball games, track meets, softball, baseball,” he said. “I went with the soccer team earlier since I had played with them. I joined and helped record and also helped on the sideline.” 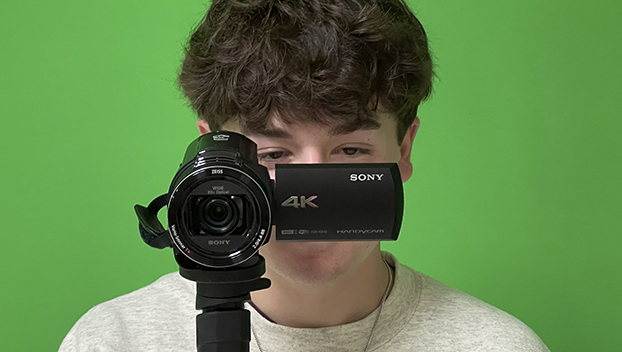 Braxton Doré will attend Texas A&M in the fall to major in sports management and minor in journalism. (Monique Batson/The News)

Doré said some of his best work came from accidentally getting knocked down on the football field.

“Some of the best clips were seconds before I fell to the ground. It was wild,” he said.

Another surprise to the PNG senior was learning his instructor was a bit of a local celebrity when it came to journalism. Picazo spent many years in radio and broadcast journalism.

“I kind of blended him in with the weather guy,” Doré said with a laugh. “I didn’t really know what he did. He explained it to me and I was like, ‘whoa.’”

When he heads to Texas A&M, Doré will blend his love for sports and broadcast journalism, choosing to major in sports management and minor in journalism.

“I could go in the journalism path,” he said. “It just depends on what I like better in college. I plan on getting involved in their news (organizations).”

In addition to being behind the camera, Doré enjoys the past, saying history is his favorite subject. Although he attributes that to his teacher, Amy Neeb.

“She just kind of engages you more,” he said. “I had always like history, but it gets boring. It’s the same thing over and over again.”

And he has left an impression on her, as well.

“Braxton is every teacher’s dream student,” Neeb said. “Not only is he smart, but he’s engaged in every lesson. He works hard and will do what is necessary to ensure success. He has a bright future ahead of him. I have no doubt that he will do great things.”