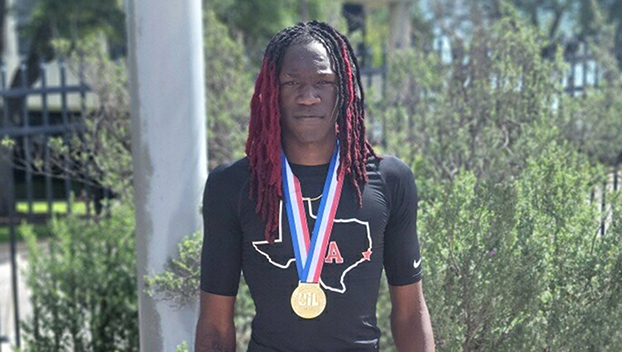 Memorial’s Ke’Andre Jones earns the gold medal in the high jump at the state meet in Austin. (Courtesy Photo)

He told Port Arthur Newsmedia he wanted to beat the school record in the high jump and wanted to make it to the state meet.

On Friday Jones exceeded those goals and came away with gold medal after jumping 6’8” in Austin.

“It feels unbelievable,” he said. “This isn’t anything new to the school but it is new to me.”

Jones said his morning was too busy to get nervous and added the nerves didn’t really set in until it was out of his hands.

“I got nervous when the guy that came in second place was trying to jump 6’8”,” he said. “I had already done it. He was on his third attempt and I was hoping he wouldn’t get over it. I know that sounds kind of bad, but it was in my favor. I had a water bottle in my hand and I smashed it as soon as he didn’t get over it. That is how happy I was.”

“The people that do the right things all the time are going to have success at the end,” he said.

The season really turned for Jones at a home track meet in March. In his first meet, Jones won by jumping 6’2”, but that was far from what he would need to qualify for state. Last year Maleek Jones, who held the record for high jump, earned third at state with a jump of 6’4”.

At the Port Arthur Relays, Jones raised the bar literally and figuratively. He again won with a jump of 6’2”, but kept increasing the height. Before he finished, he had cleared 6’9”, setting a school record as coaches went into a frenzy.

“Once he hit that mark, we knew what his abilities could be,” Assistant Track Coach Art Simpson said. “That was still in the beginning stages. We knew what he was capable of and we built on it.”

Jones, who is a junior, also left Austin with a little preview of what next year could look like. After winning the event, he attempted to clear 7’0”. On both attempts, he clipped the bar with his leg on the way down, Simpson said.

“He is over it,” he said. “It is technique. He is still raw and that is what we will work on next year. He has the ability to jump high. If we add the technical piece, he is easily over 7’2”.