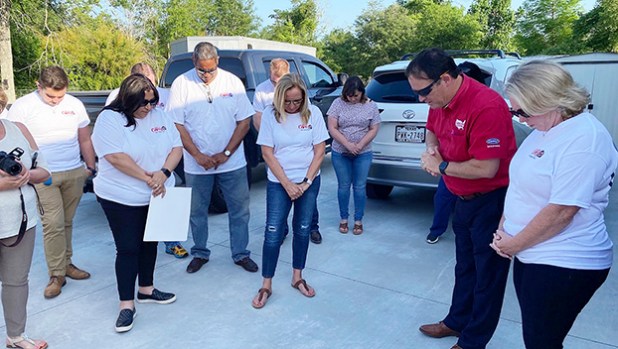 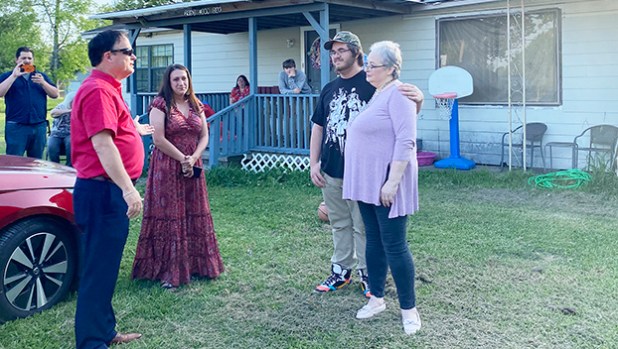 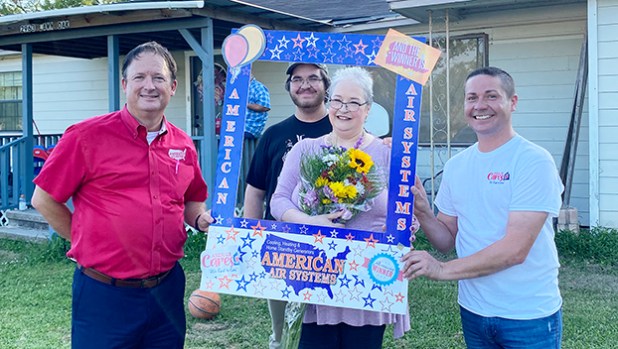 Awardee Monica Roe was the center of attention this week in Orange. She is flanked by Lee Potter and Jade Davila of American Air Systems. (Eleanor Skelton/Special to The News) 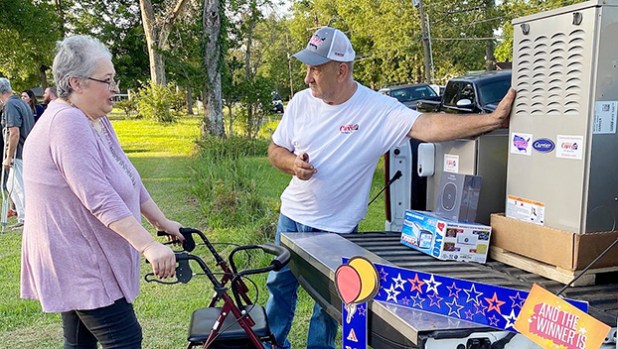 Tommy Stanford of American Air Systems, right, explains the heating and air conditioning system, as well as purification system, that is going to be installed for Monica Roe, left. (Courtesy photo) 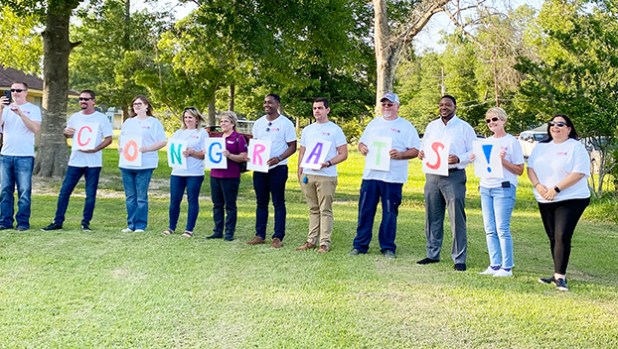 ORANGE — Monica Roe is a four-time cancer survivor, but she and her family have been living for 11 years with limited access to air conditioning.

She cried as American Air Systems told her Tuesday evening the company would give her a brand new heating and air conditioning system, but also repair a collapsed ceiling, which is making it difficult to keep out the Southeast Texas heat.

“We have air conditioning, but it doesn’t work well,” she said. “Basically, we’ve had trouble ever since we’ve moved in.”

While flooding from recent storms like Harvey and Imelda did not get into the house, the moisture brought mold she is working to remediate, she said.

Roe also deals with Hodgkin’s lymphoma, a lymphatic cancer, which is currently in remission again after her fourth round of treatment.

The air purification system donated by American Air Systems and their business partners will also help Roe with her limited immunity due to cancer treatment, she said.

“It’s a game changer,” she said. “To be able to be comfortable in my home, because I can’t tolerate the heat very well. It makes me literally ill. This is going to be such a blessing.”

A complete HVAC system, along with a purification system like this, normally costs between $14,000 to $15,000 to install, American Air Systems president Lee Potter said.

Neighbors helping neighbors is how this all started, Roe’s neighbor Allison Carter said.

What Carter wrote about Roe and her family’s struggles made their story the winning nomination for American Air System’s AmerAir Cares annual program.

“When we first moved here, we wanted to save money and we were living in a camper,” Carter said. “Her kids did Secret Santa for my kids. It touched my heart, and that’s how we became friends, more like family.”

Carter is organizing other fundraisers to help Roe, who is a single mother on disability due to her medical conditions. When she saw the AmerAir Cares giveaway program through a Facebook post in December, she knew she needed to nominate her neighbor.

American Air Systems president Lee Potter offered a prayer of thanks before surprising the Roe family with their new HVAC unit.

“If we, together, can just help one person every time we can, pretty soon we won’t have anybody else to help because we will all be good,” he said in his prayer. “It’s a long task, but we’ll get there.”

The Roe family won the nomination out of 91 applicants, Potter said. All applicants are reviewed by a committee of community leaders with names and addresses redacted, which he said allows their stories to speak for themselves.

“We appreciate everything that you have done, the struggles that you have had to deal with,” he said to Roe. “Enough is enough. We can’t wait to put it in for you.”

Potter believes giving back to the community that sustained his business is essential.

“We are just here because God has blessed us to help,” he said. “Southeast Texas has taken care of our company for 40 years.”

This year marks the AmerAir Cares program’s fourth annual giveaway, Potter said. Several of their business partners each donated a part of the HVAC system to make the donation possible.

Previous recipients include two families in Beaumont and a family in Port Arthur last year that lost their air conditioning system in Hurricane Harvey.