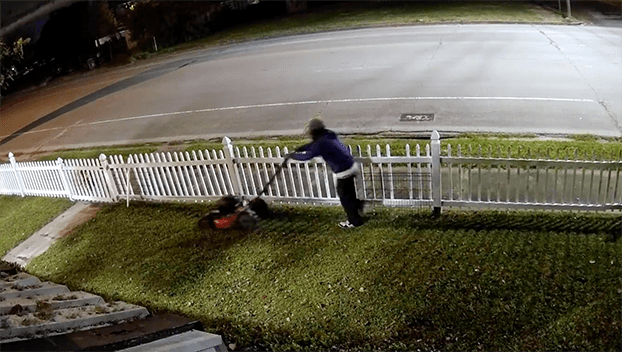 When Port Arthur police posted a video of a suspected burglar putting gas in a lawnmower then cutting the victim’s lawn, they didn’t expect the attention the crime would receive.

And while the man they believe burglarized the building has been identified, he hadn’t been apprehended as of Tuesday.

Port Arthur Police Det. Mike Hebert said “never, in a million years,” did he think the video would be spread nationwide.

Hebert said police have received calls from around the country and have been told the story also made international news, as well.

CBS Morning News showed the video recently, and media such as the New York Post, Toronto Sun, Daily Beast, Daily Mail, Inside Edition and a number of international media sources picked it up.

The footage of the security video posted May 5 tell of an April 1 crime where a man removed property from a building in the city without the owner’s consent. The alleged criminal was identified as Marcus Hubbard.

In the video a man is seen removing a bicycle from a building then pulling out a lawnmower, adding gas, then cutting the victim’s yard.

The actual police call came in of an unknown person cutting grass on their property.

When officers arrived, the man immediately took off running and dropped the lawnmower.

Police theorize narcotics may have played a part in the incident, as at one point, the man appears to have a conversation with someone but no one is there.

Hebert said the closest related crime was when a person broke into a garage that was witnessed by a neighbor. The grass was very high in the yard, he said.

As the officer pulled up to the scene, the man who had been dragging the lawnmower across the yard stopped and tried to cut the grass from the center of the yard, which made no sense to responding police.

The officer asked the man if this was his house and he said yes.

“Other than stealing things and starting them up like a riding mower… in my 32 years (as an officer) I’ve never seen anyone break into a garage and cut someone’s yard,” he said.

Police did not release the address of the incident.