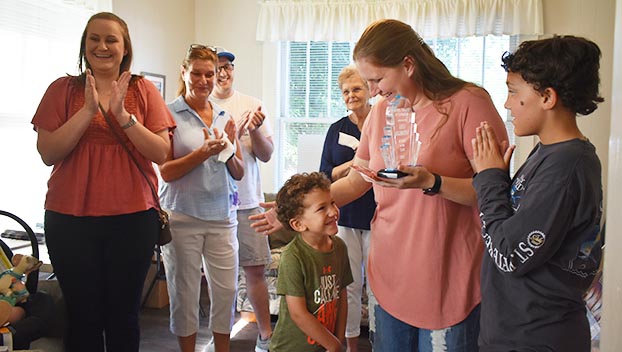 Two local moms now have an additional title to their name — Mother of the Year.

Groves’ Higginbotham is a role model

Kayla Higginbotham has spent most of her life around children. She babysat, she worked as a daycare teacher for most of her adult and teenage years, and currently works as a medical assistant at a local OB/GYN office. She spends her days off babysitting her niece and cousins.

“She has been a mother figure to many children within the community,” said Katie Gripp, Higginbotham’s sister, in her nomination letter. “She puts her kids above everything else in her life. Even though she is a single mom, she works full time to make sure her children never go without. She is providing her children with a wonderful childhood — taking trips, playing sports, doing whatever they need to be happy.”

Gripp said when she found out she was going to be a mother, she hoped and prayed she would be half that of Higginbotham.

The Groves Mother of the Year, like other mothers, sometimes doubts she’s doing a good job, Gripp said. She went on to say Higginbotham’s children are some of the most polite, respectful children she has ever met.

Higginbotham has two sons, Jaxon and Jake, and two stepchildren.

Her family gathered at the Groves Chamber of Commerce office Tuesday, where the announcement was made and Gripp read the nomination letter.

Higginbotham’s grandmother, Nedra Hoyt, and mother Faye Hoyt were on hand, as well as Gripp’s husband, Hunter, and daughter Makenna and Higginbotham’s sons Jaxon and Jake.

Higginbotham was near speechless when asked her feelings. 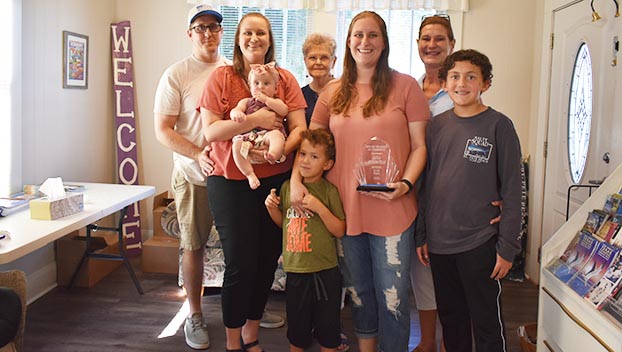 Kayla Higginbotham, center, is the 2022 Groves Mother of the Year. She is surrounded by Hunter Gripp, left, Katie Gripp and Makenna and Jake and Jaxon. On back row is Nedra Hoyt, and Faye Hoyt. (Mary Meaux/The News)

Grandmother Nedra Hoyt gave her an extra hug and explained that both granddaughters support her and include her in everything they do.

Nederland’s Garsea has a servant’s heart

Stephanie Garsea is the 2022 Nederland Mother of the Year.

Garsea is a busy mother and community member who works with Acadian Ambulance.

“We were honored to have her as our 2022 Mother of the Year because she is not only an amazing mother, but she is an amazing member of the community,” Nederland Chamber of Commerce Executive Director Diana LaBorde said. “She does so much for so many, whether at the schools or in the community or with her job. She is very attentive to the first responders, police, fire, everyone. She just has a servants heart.” 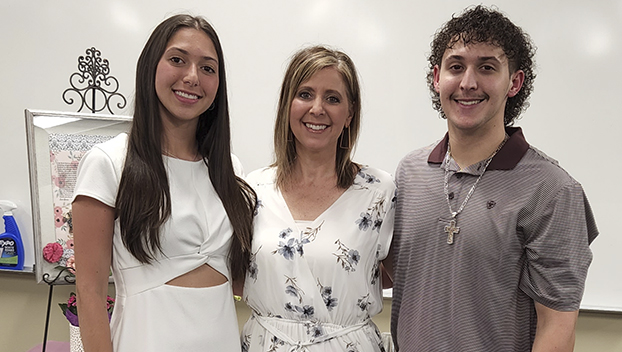 Stephanie Garsea, center, was nominated by her children and several others. (Courtesy photo)

Garsea’s children and several others nominated her for the honor.

Her daughter Alyssa Garsea’s portion of the nomination letter spoke of how her mom works a full time job, served with the Parent Teacher Association for 15 years and shares the duty with the president Roya Scott.

The busy mother was recently named head of fundraising for the Westernaire Backers.

“While juggling all her positions throughout our community, she gives her family her all,” Alyssa Garsea said. “Everything from late nights with homework to running back and forth to extracurricular activities for her kids. As her daughter, I have always looked up to her. Every day I strive to be at least half of the person she is. With every struggle she faces, she conquers it and comes out stronger then ever.”

Son Zach Garsea spoke of how his mother is driven to help everyone to the best of her ability and puts other’s needs before her own.

“She treats everyone like a brother, sister, and even her own child. She tries and succeeds at making everyone feel apart of her family,” Zach Garsea said “My mom, for as long as I have been a part of her life, is the most loving and selfless woman I know that never stops helping others, no matter the time of day.”

Roya Scott spoke of how Garsea shows love and support for all children.

“Where there has been a child in trouble, serious trouble walking down the wrong path in life, they are always welcome in her home,” Scott said. “Sleep on her sofa, have a warm meal, anything they needed.”

Robert Havens, president of the Sabine Neches Chiefs Association, also submitted a nomination letter for Garsea, as he sees the importance of the services Garsea provides, from chairing the golf tournament committee to the public relations committee and more.

He went on to say she is a beacon of family values and is a loving and doting mother to her children.

Garsea was shocked and humbled when she learned of the honor.

“I really don’t feel worthy,” Garsea said. “I do what I do because that’s just me. I am beyond honored to receive this recognition.”

She said her best job has literally been with her kids and their friends. When they are all at her house, her heart is full and she feels blessed.

“I believe we should be the light, God’s light and shine light on others,” she said.

Garsea said she wants her legacy to be leaving a mark of positivity and compassion in the community and for her kids to carry that on.

Port Neches’ 2022 Mother of the Year is Jeanifer Bartlett.

Bartlett’s sons Mike and Tyson said in their nomination letter how lucky they are to have her as their mother. She is always busy making sure they have everything in order, homework is done and hey are at practice on time, among more.

Bartlett is also active in the PTA and her church.