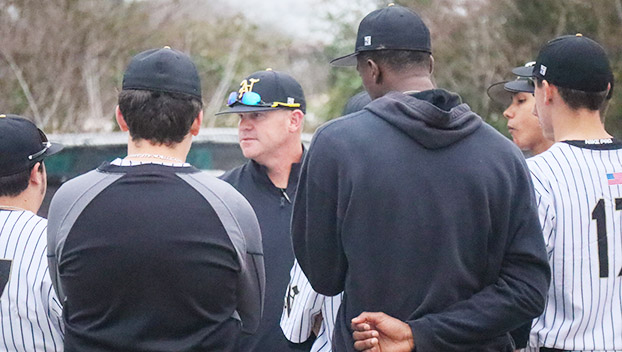 NEDERLAND — The Nederland Bulldogs did not go out without a fight, giving No. 10-ranked Friendswood all it could handle in a close elimination game over the weekend.

The Bulldogs lost 5-2 in the playoff opener. Nederland fell 9-7 in the second game of the series, giving Friendswood a 2-0 sweep, but Bulldogs Head Coach Bryan Spell is proud of how his team played.

“I think our kids walked out with a lot of pride,” Spell said. “I think anyone that saw us in that series, saw us play some of our best ball. I think it is a testament to our leadership. We came out against Crosby and Barbers Hill, and I think we were a little frustrated by how we played. We talked about picking ourselves up and our kids responded and did that.”

The Bulldogs won a play-in game against rival Port Neches-Groves to earn the fourth and final playoff seed in the district. The team entered the season in a bit of a rebuild as the majority of last year’s team graduated. Spell said the seniors on this year’s team were instrumental to the Bulldogs’ success.

“Anytime you get to the end of the season, you reflect on the senior class and what they have meant to the program over the past four years,” he said. “I told them today that our numbers weren’t exactly what we had hoped for, but I think they are proud of what we did, especially towards the end. This team faced a lot of adversity. Regardless of how old we were, we face a lot of injuries, illnesses and setbacks that could’ve done a lot of teams in earlier. It is always a seniors’ team. They left this program with some momentum.”

The head coach hopes the returning players next year can use the momentum towards more postseason appearances.

“Obviously, it is not easy to make up that ground,” he said. “They saw with their own eyes that they are not that far off. I think going forward it gives them some confidence. It is one thing for coaches to tell them they are capable of doing it, but I think after the second game at Friendswood, they were able to see it. The guys coming back next year will be confident in who they are and who we are.”

Spell was not surprised by anything this season and added he knew his team was tough and had heart.

“You always have to expect the unexpected,” he said. “I was not surprised by how we bounced back. Nederland has been known for and has a history of tough kids. It is how they are raised.”