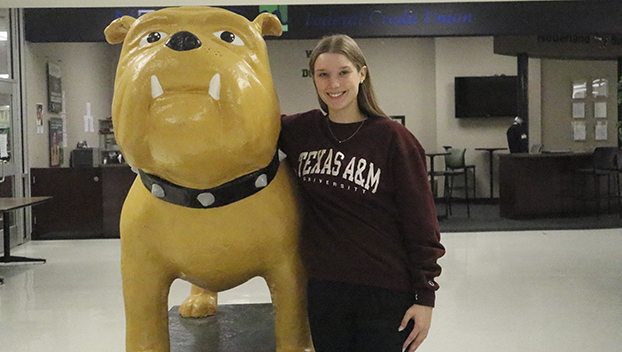 NEDERLAND — Madeline Phillips remembers going to football games as a young child and trying her hardest to get the attention of Big Ned, the Nederland High School mascot. Now, as a senior, Phillips dawned the Big Ned suit and made sure to greet as many kids as she could.

Phillips’ favorite part of being the mascot was watching kids see her the same way she looked at Big Ned.

“It felt good, knowing that I was one of those kids,” she said. “I felt like a hero.”

Phillips’ mom wasn’t the only parent to pass down a passion. The senior said she got her father’s love of history.

“Before he was a principal, he was a history teacher,” she said. “He would grade papers and ask me if I knew certain things. I am probably most interested in World War II. I find the details about it most fascinating.”

“I have never been good at math,” she said.

During her freshman year, Phillips found a new passion when she signed up for journalism. 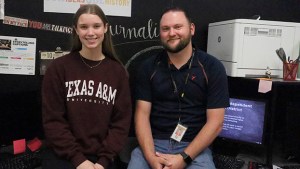 “Freshman year, my aunt introduced me to Brian Hillsten, who is the journalism teacher here,” she said. “I thought I could go to this class and it would be a blow-off class. I ended up in newspaper my sophomore year and have been there ever since.”

“She came in her freshman year and did fantastic in the news-writing portion of the class,” Hillsten said. “After that freshman year, she was adamant she wanted to be in newspaper. That was an easy call. She went to a few competitions. We compete in the spring in UIL Journalism. She did well but she didn’t place as high as she wanted. I remember her being very upset with herself. But that put her on track for where she is now.”

Phillips said the title motivated her to be better.

“I realized that he takes me seriously and that made me want to take it more seriously,” she said. “I didn’t get past regionals last year but this year I realized this is my last year. I stepped it up.”

Phillips, who actually entered the news writing competition as an alternate in district, advanced past regionals and will compete in Austin Friday at the UIL state competition.