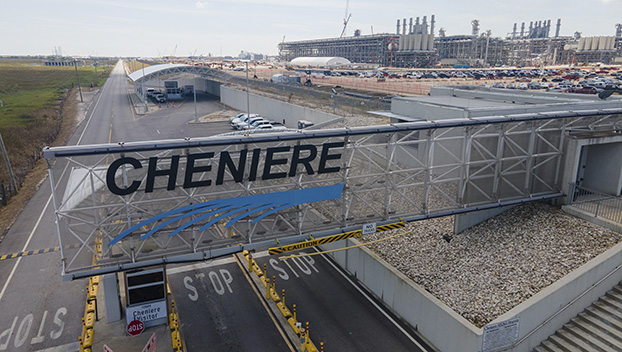 CAMERON, Louisiana — Right across a Port Arthur waterway is the second largest liquefied natural gas facility in the world.

Second only to QatarEnergy on the Arabian Peninsula, Cheniere Sabine Pass LNG facility has an impressive track record.

Earlier this month, Port Arthur Newsmedia toured the facility and watched as a number of Cheniere’s 6,000 horsepower tugs assisted with mobilization of the LNG tanker Isabella. The vessel was piloted out of the area by a Sabine Pilots captain.

Cheniere is one of the only facilities along the Sabine Neches waterway with its own dedicated tugs, said Maas Hinz, vice-president and general manager of Cheniere LNG Sabine Pass. 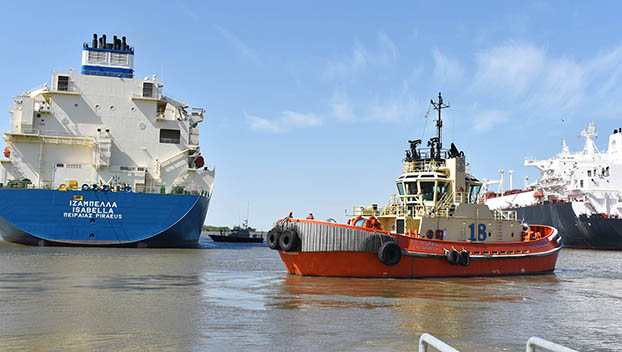 A tugboat prepares to help move the Isabella tanker in April out to sea from Cheniere Sabine Pass facility. (Mary Meaux/The News)

“So this success is about a decade in the making and we been shipping LNG from the facility since February of 2016,” Feygin said. “In these relatively short six years, Sabine Pass is currently the second largest world’s liquefaction facility in the world. We’re second only to the Qatar energy facilities.”

In addition, there is a second Cheniere facility located in Corpus Christi that is roughly half the size of the Sabine Pass site from a production standpoint. Together they have exported a little more than 2,000 cargoes to approximately 40 countries and markets.

“One of the things that Cheniere brought to the LNG world, which was quite novel, was the business model of not actually owning the resource,” he said, adding they buy from U.S. and Canadian gas markets.

They typically transact between 70 and 100 producing companies.

The Sabine Pass site encompasses more than 1,000 acres with a channel depth of 40 feet.

To put the size in perspective, each of the five storage tanks, visible for miles around, could hold a 747 airplane inside; the berths are able to receive the world’s largest LNG carrier.

There are two berths at the site with a third berth under construction.

The targeted completion is in the first quarter 2023, according to information from Cheniere.

The company is and has been working toward clean climate initiatives for years.

“One of the first things we did in support of our social license to operate and in supporting the energy transition that we are all a part of, is commit to providing transparency of every cargo having its emissions profiled reported,” Feygin said.

Every cargo starting this year from Sabine Pass and Corpus Christi provides LNG customers with greenhouse gas emissions data. The Cargo Emissions tags are “designed to enhance environmental transparency by quantifying GHG (greenhouse gas) emissions of LNG cargoes from the wellhead to the cargo delivery point,” according to information from Cheniere.