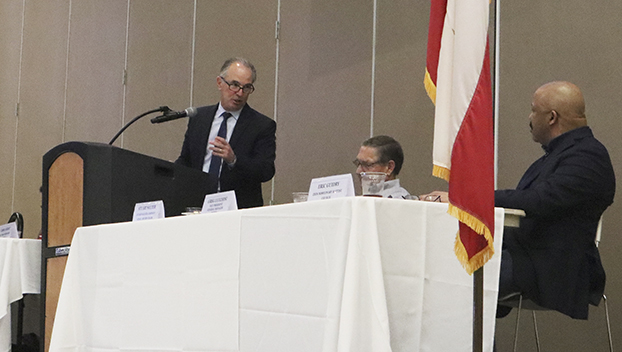 Motiva unveiled the project, which aimed to revitalize downtown Port Arthur, in 2019.

“There was a lot of excitement around that, but then, the pandemic happened,” Lucchesi said. “Like a lot of other companies, we were struggling mightily as the industry was and we put that project on a slow roll. As I said, industries turn around and, God bless, Motiva is doing good. I am proud to say Motiva is going to be bringing that project back to the front and center.”

“We are working with architectural firms and getting some quotes,” he said. “We are going to see some activity taking place. We are going at it as quickly as we can. It is not going to be as quickly as many want, but by this summer, it is my expectations that we have funds approved.”

The Senior VP and GM also said he wanted to have the project manager produce a timeline this summer.

Lucchesi asked that the city and chamber of commerce continue to support Motiva.

The Senior VP took time in his presentation to talk about gas prices and Southeast Texas’ role in the global economy.

Lucchesi said COVID and the world’s reaction to Russia’s invasion of Ukraine have played a roll in the rise in gas prices.

“In 2021, the economy started coming around as the world started to learn how to deal with the pandemic,” he said. “Now, we are producing all we can, but the supply isn’t getting there and the prices go up a little bit. Then you take in to account what is happening in Russia and Ukraine. The free world has done what they have to do and stopped buying crude oil from Russia. That puts a higher pitch on things. It is all about supply and demand. It is about the supply of crude, the demand for that crude and our products. As crude becomes less and less available, the price goes up.”